Home Movie Reviews Check out our review of 21 Bridges, out now on Amazon Prime. 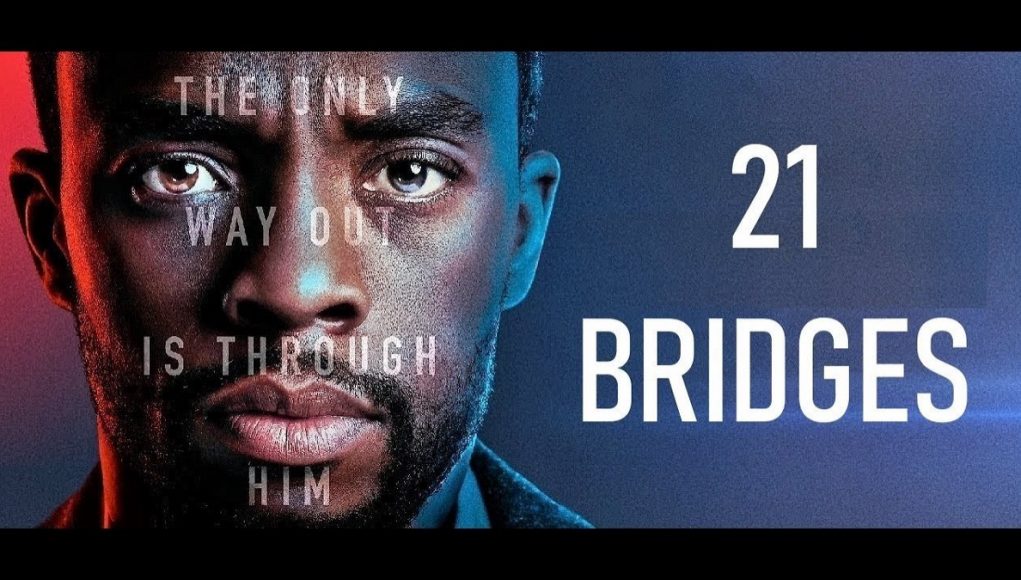 21 Bridges may sound like a BBC documentary by Jonathan Meades about famous bridges, but it isn’t. What it actually is, is a film that follows the story of NYPD detective Andre Davis (played by Chadwick Boseman) who is thrust into a citywide manhunt for a pair of cop killers. This manhunt leads him on a quickfire journey which uncovers a massive, unexpected conspiracy.

Directed by Brian Kirk, who has a somewhat stellar TV directing catalogue featuring credits including Luther, Penny Dreadful, Boardwalk Empire and Game of Thrones, 21 Bridges is blessed by his well-rehearsed, high production, smoothly done directorship. In fact, the whole cast, tone and production level is really rather good. It’s quick, slick and goes along with a tick.  There’s good pacing, typical cop shoot outs, a few of those must-have running cop scenes, some drama, some more shooting and then some more tense drama and some more shooting.

On paper we have no weak link in sight with the Avenging Russo’s producing and a cast that includes Black Panther, Commissioner Gordon and the bird from G.I. Joe: The Rise of Cobra. The only, and somewhat entire, problem with 21 Bridges lies in its narrative. 21 Bridges has the most obvious, hashed-out, has-been cop film narrative I have seen in a long time.

People often wonder why they don’t make slick cop films anymore like they used to in the 1980’s and 1990’s. Quite simply, it’s because they all ended up having the same, predictable narrative, with the same plot twists. This is why comedy cop and buddy cop films were invented to provide light relief to the traditional, overdone cop centric films. These traditional cop films are now cop TV shows and they are all the better for it. In TV you can explore characters fully, show their motivations while also giving a good bit of bad-guy build up. Whether the people behind 21 Bridges thought that so much time had passed that people wouldn’t remember all those other, slightly more original cop films, or that younger people haven’t seen these sort of films before so this would be original for them, I don’t know, either way it strikes of, at best, of opportunistic laziness.

Could this have been fleshed out more in a TV show? maybe. Boseman’s cop portrayal deserves more than this but like the western film before it, leave bland, boring, samey cop films alone. It’s done.

21 Bridges looks smart and slick but it’s so obviously predictable from the outset. High on production, low on originality and imagination. I think i expected more, or maybe i just hoped for it.