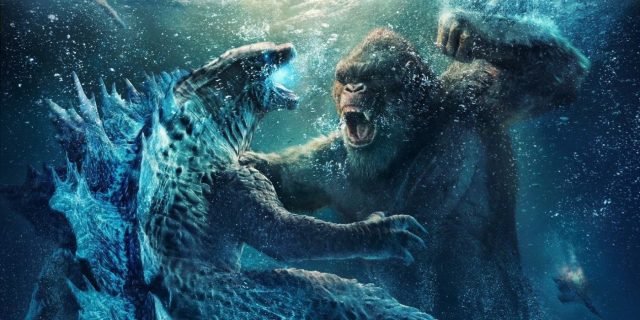 The first film in the latest franchise incarnation of the monster-verse, 2014’s Godzilla, had many flaws. It did however have an identity. It took time to do some character development and actually had some good action, albeit in very limited, small dosed fashion. It teased Godzilla, making him central yet subversive to the human story. Then there was 2017’s Kong. An alright film in truth, with plenty of action and some iconic monster-verse imagery. Godzilla: King of the Monsters (2019) was an altogether different beast. They threw everything at it and most of it stuck. The story was a muddled mess but what it lacked in solid storytelling it more than made up for in action. The blend of human story, bubbling alongside the giant monster fights made it interesting. It was exactly what you wanted and expected it to be. Godzilla vs. Kong seems to have taken inspiration from both. I say inspiration very loosely, because really, they took the worst bits from both and put them into one giant, monster fighting shit-show.

I was so looking forward to it, I really was. I’ve even paid £15.99 to see it in all its glory and I’m going to be kicking myself all week that I have wasted so many of my hard-earned pennies on it.

Where shall I start. Well, it’s badly written, devoid of humour, lacking in notable dialogue and so, so very badly executed. The first hour or so is a pretty pointless mess. The only notable thing I can remember from it (apart from various plot holes), was seeing the fight clips I have already seen from the trailers. The posters for the film looked great, the trailers were pretty good but they basically showed off around half of the films entire action sequences. The marketing has certainly been good for the film, but sadly at the expense of the actual spectacle itself. It can truly go down as one of the worst films in history for over-marketing, and subsequently ruining itself in the process.

The returning stars, such as Kyle Chandler and Millie Bobby Brown, as well as the new pointless additions, such as Alexander Skarsgård and Rebecca Hall, offer very little to proceedings, only adding name recognition and a small degree of continuity to the monster-verse. The entire cast, most of whom are much better than this, are wasted on this utter dross-fest.

After seeing director Adam Wingard say that future monster-verse films could have fewer human characters because that’s what the audience wants now, I wonder why the hell he wasted most of this film on dreadfully pointless human narrative. There’s also so many plot holes, narrative gaps and things to wonder. The idea to go down the Tron looking bad guy sci-fi element and neon fight scenes just doesn’t fit with the rest of the franchise. It’s just so out of place and a weird visual direction to go. There’s also so many plot openings that go against things set up in the previous films, such as where all the other titans are, Zilla’s hole through the planet breath and the whole scope and physics of the hollow earth thing. I’m still actually quite angry at how a scientist, who only saw an earth-entering craft minutes earlier, can suddenly pilot it with no training whatsoever. Its not even wondered upon, it’s just what the film does – pointless things, pieced together into a monster sized mess.

Of course, it was always going to be silly bash-em, smash-em film, with a somewhat predictable finale but wow, what an utterly disappointing end. They have taken two of the most-iconic non-human characters in film history and made them look, not only weak, but also boring. Godzilla comes out of it looking awful, he’s simply shown as just a giant lazer breath on legs, while Kong fairs slightly better, but is still reliant on human intervention and a weapon. It’s just such a disjointed and ill-fitting follow-on from King of the Monsters, and such a disappointing journey for both titans.

Yes, there’s splendid CGI and visuals, and yes, the fights are mildly entertaining – but that’s about it. It’s the exact same monster building smashing we have seen before in the franchise, but this time it’s just repeated to the point of boredom. It’s just so un-original, uninspired and thoroughly disappointing. There are so many things I wonder about at Warner Bros. Snyderverse/DC films aside, why the hell Wingard gets the chance to direct ThunderCats off the back of this I will never know.

You can also tell how bad the film is by the fact there is no post-credits scene. This is because they didn’t bother to do any story building so there was nowhere left to go. No tease, no thought and no route for another film. It’s simply ruined, a scorched mess where the only thing left to do is simply have a boring centre of the earth Kong film, which would simply look just like Peter Jackson’s King Kong.

Godzilla vs. Kong is out now on selected big screens and on HBO Max in the US, with the film on-demand elsewhere.