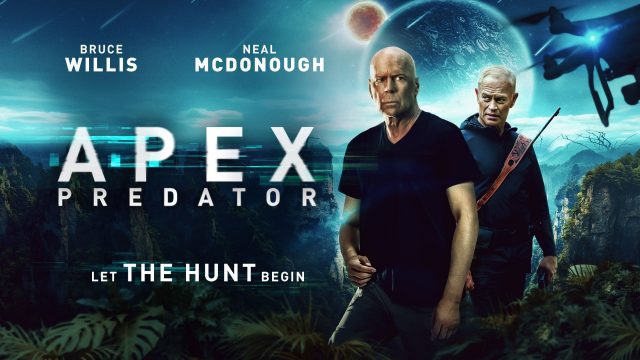 Serving a life sentence for a crime he did not commit, Jim (Bruce Willis – Die Hard,) is offered a chance of freedom. But the price of freedom could be his life as he finds himself face to face with the world’s greatest hunters… traps, guerilla warfare and all out violence. Will Jim survive this murderous game of cat and mouse or will the hunters discover just how far he will go to survive APEX?

Ever wondered what a film would be like it you sort of crossed Predators with The Running Man? Sounds pretty good hey? Apex (or Apex Predator as it’s known in the UK) is a near future set action film where six hunters from a special, very expensive corporate hunt club pit their wits and flex their bits to take down Bruce Willis. On paper at least, the premise, although not original nor unique, is believed and sold to be an action-packed hunt-fest.

Initially (and I do mean initially) Willis doesn’t show any of his recent film boredom where he barely makes anything more than a monotonal noise with his face simply photoshopped onto the poster. He sort of actually looks enthused at the very start but this soon disappears as he begins to look fed up with the hammy script and the endless walking around some woods, looking more and more like an old man trying to re-live his best years with a hobble and a groan. He does get to smoke a cigar, deliver an 80’s movie star line and hold some ill-fitting guns so he ticks all the usual past his prime action star boxes.

Lochlyn Munro tries to add some interest to proceedings but the film really hinges on Neal McDonough as he sells his part the best he can. He is by far the most consistent, reliable and watchable actor on show. Megan Peta Hill’s character comes across as interesting but gets nothing in the way of character development, while Alexia Fast plays a one-sided holographic role, which she does well in truth with the narrative crumbs given to her.

Writing wise, there’s someone having a bit of a laugh with Willis’ film back catalogue, which added some amusement to a somewhat dreary backstory. When it comes to the film’s action, it’s simply generic, boring stuff which even comes with a guy mimicking Ledger’s Joker to add another sprinkle of unimaginative dross to proceedings.

The dialogue is fairly bad too. Although there’s one or two good low-budget lines here and there, it’s just so cheesy macho predictable. It’s a dick measuring contest in a really B-movie type of way that’s just so 1980’s, but on a tragic budget.

There are some fairly moderate effects on show, some much better than others, but towards the end there are some odd dusk and daytime cut scenes which really sort of goes to round off how they gave up caring as the film went on. The ending is anti-climactic and the film just sort of nods off like an old man falling asleep in a rocking chair.

Corey Large (who is also Producer) yet again appears with Willis who seems to be tied up making film after film, alongside the film’s director Edward Drake. We still have the film treasures of American Siege, Gasoline Alley and Paradise City to come from the trio and I’m sure they will all be absolute gems and in no way terrible too!

Apex/Apex Predator is such a completely pointless film. It’s not unique, interesting or even memorable. It’s a movie by numbers flick dreamt up from whatever deal the various studios have cooked up with Large, Willis and Drake. This is not how movies should be made, thought of or even done.

This aint no bacon and eggs on a Sunday morning. It’s just cold, lumpy miserable porridge.