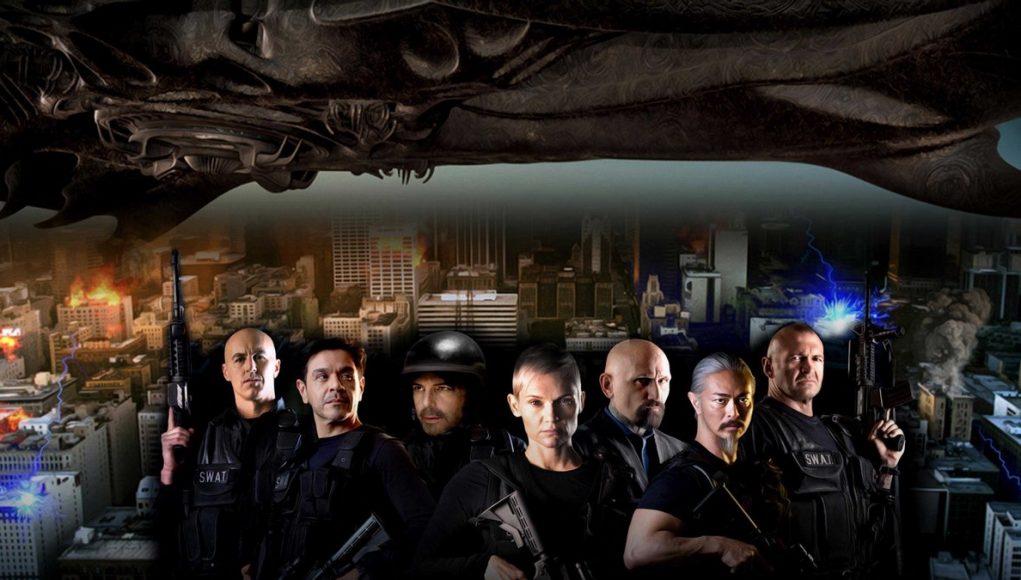 Attack of the Unknown revolves around a SWAT team who are transporting a vicious crime syndicate boss. When a catastrophic alien invasion strikes, they must fight to protect their prisoner, as well as themselves.

Now, the popular and widely used “so bad, it’s good” term is too often banded around by online critics in regard to what I shall call ‘budget efficient’ films. As much as I would love to add this cliché term to my review of Attack of the Unknown, I won’t. The reason I won’t, quite surprisingly, is that the film in no way merits such a term. It’s simply not bad at all. In fact, it’s actually fairly entertaining.

Directed by Brandon Slagle, a guy with a good history at this level, Attack of the Unknown is essentially a low-budget mash-up inspired by films like Battle Los Angeles mixed with Independence Day, War of the Worlds and Assault on Precinct 13. There’s also some very complimentary influences and mild homage thrown in from a few other well-known sci-fi flicks too. Tara Reid is also in it. Granted, only for about 30 seconds, but she does appear in a very strange flashback segment adding her newfound B-movie gravitas to proceedings. The actual main cast consists of serious B-movie actors such as Robert LaSardo, Richard Grieco, Jolene Andersen and Douglas Tait.

The film has a fairly predictable narrative with some interesting genre mixing shoved in to give a somewhat unique, yet oddly familiar story. Shot in LA, the film features some great city-wide shots that wouldn’t look out of place in a bigger budgeted film. There are gangsters, guns, aliens, cops, drug dealers, prisoners, strippers and their boobs. It basically has everything in it that a 13-25-year-old boy wants to see in a film.

After some admirable world setting, what could have become a grander scale effects film, gets suitably scaled down to a grittier, more localized story. After a lively, slightly corn-cheese opening, the middle section of the film re-sets the agenda. Annoyingly this is the worst bit of the film, where a tepid and unnecessary 10 minutes annoyingly takes the pace out. I’m all for pace changes, but these are not characters we need to care about and a little shaving here and there would have kept the action flowing.

It’s absolutely fantastic that better, cheaper technology can enable previously untouchable genres like sci-fi to produce credible visuals at a lower cost. AOTU’s District 9 type spacecraft shots are fleeting, yet solid looking. That’s not to say that some of the visuals don’t suffer from the odd bit of ropeyness, but it fits.  As for our aliens, they have a whole creature from the black lagoon vibe. Yes, basically a bloke in a suit, a bit cringey in truth, but it bloody well kind of works.

I mean, it’s a pretty bad film if you unfairly compare it to its inspiration. It’s not new, or even that original, but you can really get a sense of collaborative effort and passion coming through and that comes across in a very positive way for the viewer.

For all my expectation of poor-quality acting, or the even more tragic over-acting, the film is actually pretty solid. Even fleeting cast members do a comedically admirable job, adding dialogue and fitting the fodder role applied to their diverse range of characters. It far exceeds the expectations one might have about it. The shots are clear and the dialogue is consistent. Now this may sound simple, but many films at this level forget about sound and rush the basics of the viewer actually wanting to hear things.

There’s also some good impact swearing too. A few lines here and there that produce some chuckles and amusing eye-rolls of derision. The thing is, it works. It’s simply not a bad film at all. Yes, of course it has problems but everything fits – everything is appropriate to its level. It knows what it is, and thankfully, it’s that best of all movie things – entertaining.

Attack of the Unknown is available now on VOD.