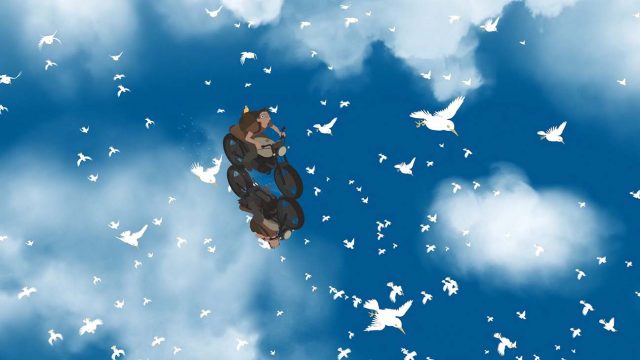 A young boy wakes to find himself hanging from a tree by his parachute. He has apparently crash landed on a mysterious island, one which is inhabited by a menagerie of creatures, as well as a giant spirit who pursues him across this strange new land as he attempts to find a way back home.

Away is no mass produced or highly financed Sony or Disney Pixar animation, it’s more of a clean and simplistic piece, with a mild anime look. With its minimalist style there is also no doubt of its visual similarities to many popular indie video games too. The animation can be a little odd when flowing, almost smooth yet clunky, but once adjusted the films animation is engaging, and full of the odd and unique things one hopes to see in such a piece.

The film, with its vibrant and engaging palette of colours, puts you in a hypnotical and mesmerising non-verbal trance.  The colour balance and tones, alongside the music, brings such mesmerising explorative feelings, as well as enforcing the impending terror when needed.

The boy is carefree and adventurous, yet seemingly dogged by the menacing foe that constantly follows and confronts him. The story, which is just plain weird and dream-like, flows along with such desire and pace that you simply can’t wait for the next scene. By telling the tale in a series of chapters it also creates something far more delectable as the boy’s journey takes him to new landscapes, each with their own animated uniqueness and intrigue.

The worldbuilding is so beautiful, yet so oddly familiar. The blend of dessert, forest, mountains and lake locations all help to create a familiar yet distinct look, but also allows different animation tools to be used, all helping to captivate the viewer and expand the narrative.

Without voices and words, the impact of the films score, along with its visuals, needed to be highly attuned, and quite amazingly they are. They sync wonderfully and help make the film an immersive watch, with the viewer not even caring too much as to what exactly is going on. The exploration of the boy’s new landscapes, mixed with his relationship with the animals in it, creates such an interesting and harmonious film. The whole film leaves so many unanswered narrative questions, but it simply doesn’t matter as its too absorbing to be any real issue.

When you consider that one man, Gints Zilbalodis, has animated, directed, edited and scored the film, it’s a truly remarkable testament, and speaks volumes for the abundance of storytelling and animation talent he possesses. The film seems to be a real labour of love and it’s an astonishing piece work for someone’s feature debut.

Away is certainly different, as well as being brilliantly engaging at the same time. It’s animated meditation that’s beautifully simple and laid back. It’s just so watchable and absorbing, taking you on a beautiful journey you never really understand.

Away is available now in the UK on Sky Cinema and Now TV.