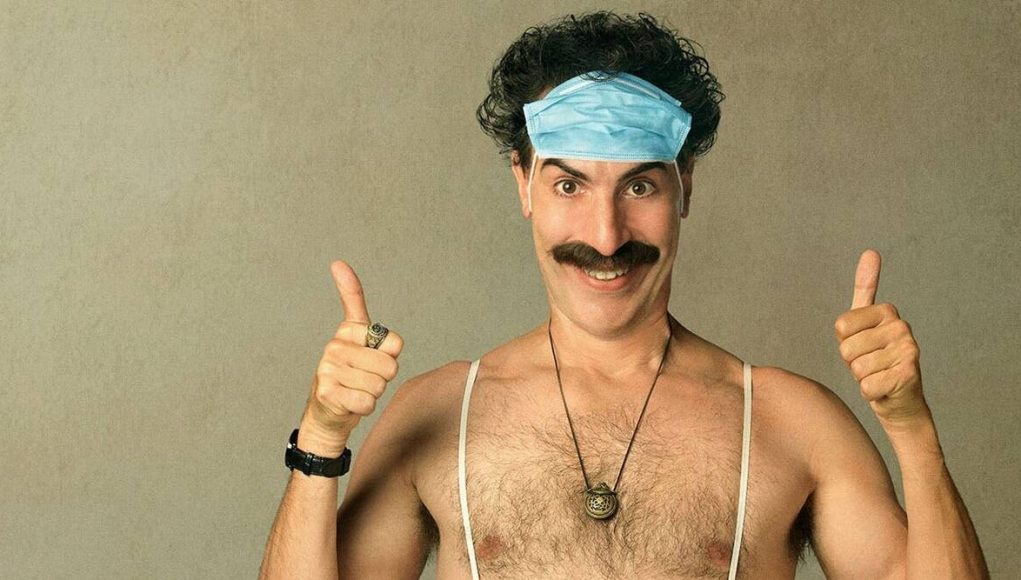 This time around, Borat is joined by his daughter Tutar on his trip to the US. Freed from a life sentence of hard labour for bringing embarrassment to Kazakhstan with the first film, Borat is sent to give a gift to “someone close to the throne” to restore the pride of his country.

Borat 2 will certainly not be to everyone’s liking, but then again, the character is not designed to be. While his roles as Bruno or The Dictator were a little too hammy, predictable and off-beat, as a 30-something year old Brit, Sacha Baron Cohen will always be fondly remembered on these shores for Ali G. A character so indicative of those times, who warmed the laughing bones of the nation and became a cultural icon. When Borat came to life Cohen’s focus had already turned towards creating a character to focus on the good old US of A.

The first Borat was a splendid mockumentary with a sense of spontaneity, originality and an occasionally natural and unscripted feel about it. Borat was pre-me too, pre-BLM and well, pre-social media. With the character being unknown it allowed time for comedic build up, for shock and awe and the eking out of daftness to get the killer line in. The first Borat was just crass, awkward, stupid silliness – but it was genuinely funny. It was a joke at stereotypes and how the world, America in particular, sees other nations while simultaneously poking giant holes at the American way of life. Cohen continues to turn his focus over recent years towards the US, highlighting many topics through his personal and characters outspokenness.

Borat 2 sadly has a completely unnatural feel. The first film had a loose story, edited with the funnies, whereas this is far more scripted to its end. A little too much time is deliberately spent on pot shots at one political party, and while humorous if you agree with the films clear agenda, it takes the character away from being truly original. Some of it is cheap, lazy writing but frankly its still far funnier and on the nose than any modern Will Ferrell tripe. The release date and content are also no coincidence, and its really no surprise that Bezos’ Prime Video bought the rights to it.

There are some good chuckles to be had in between the political focus and the daft intertwined personal story. His daughter, played by Maria Bakalova, is given a wide variety of character tasks which she absolutely nails and Cohen and her seem to genuinely have some fun along the way. Cohen still pushes the boundaries of acceptability with the character, sometimes happily parodying his own parody and crossing lines that really don’t need to be crossed.

As with all comedies though, the problem is that some scenes hit, while others miss their mark. Here, everyone seems to be in on the joke. It’s rather a bit unnatural and forced at times, with actors instead of real people and situations. This leaves some scenes very short on humour as they lack any shock or comedic value after an edit. Some others verge on cringey and these are some of the ones which the Borat character does best. With the character left alone for so many years most have forgotten about him, but many remember good old Borat, and the clever use of character disguises does allow for this film to still pack a punch. The narrative also seems a bit weak as it moves along but it gets beautifully wrapped up at the end, tying everything up with in-jokes and celebrity digs.

While Borat Subsequent Moviefilm lacks the charm and originality of the first, it’s still refreshing to see this level of clever satirical comedy played out in film form. It’s a welcome distraction to all the death and economical destruction, as well as a good reminder as to how far we have come since the first film. Some may ask whether and why this sort of comedy still works, but the same could be said about Fawlty Towers or Mr Bean. Funny characters always work, as long as they are funny.

Borat: Subsequent Moviefilm is out now on Prime Video.