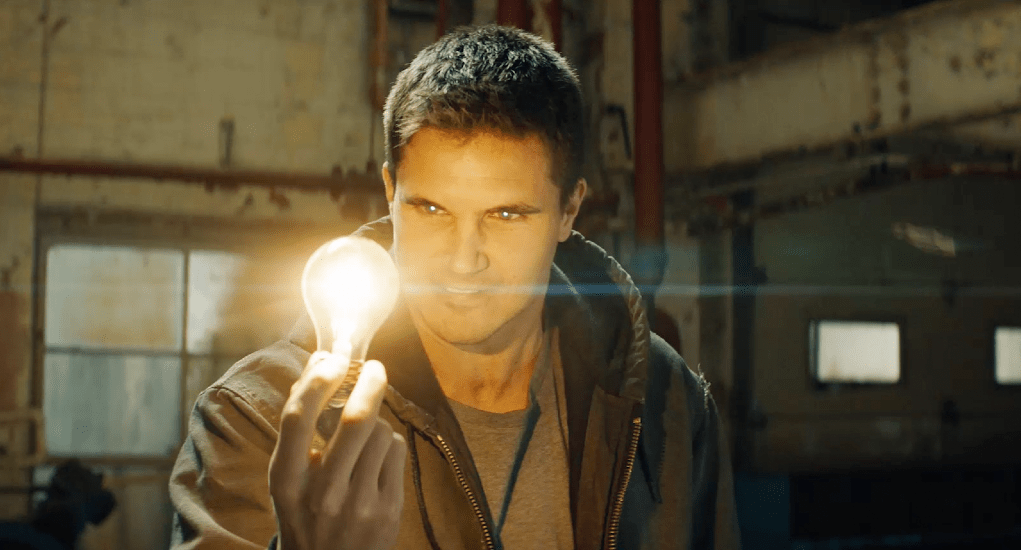 Code 8 opened last year to a very tepid box-office response and has now landed on Netflix in the UK and several other worldwide locations.

Now, Code 8 is an interesting feature film for a variety of reasons. Firstly, for its production it raised $2.4 million via crowdfunding, so it’s financing for the project makes it fairly modern and unique. I’m not sure whether the film was 100% financed this way but it’s a fantastic amount bearing in mind so many films try this method of funding, only to fall well short. Secondly, it’s a sequel to a well-received short film from 4 years ago, starring the same cast and from the same director. If those weren’t novel and uniquely modern enough facts to make Code 8 more interesting, it has already teamed up with new streaming service Quibi (Quick-bites) for a spin-off series.

The film is also not without some recognisable sci-fi acting talent too. Our lead, Robbie Amell, was in The Tomorrow People and The Flash, while his cousin Stephen Amell played Green Arrow for 8 seasons. They say stick to what you know and these two have certainly done that with Code 8 set in the fictional and somewhat dystopian Lincoln City, where 4% of the population have super-powers and the police aren’t very friendly.

The entire film is held together nicely by Robbie Amell. Now, he is never going to win an Oscar for the role but he channels all the stuff needed to allow the film to flow nicely and his character to develop. As for the other Amell, after enduring 8 seasons of cousin Stephen on the three seasons too many Arrow series, I can honestly say that he has a really interesting range of acting skills. There’s gruff and moody. Then there’s bland, gruff and moody, but mostly there is my personal favourite, bland and moody. He truly makes Robbie look great in this and, honestly, that’s the best thing I can say about his performance. The rest of the cast, including Sung Kang, are all OK too, performing their roles in typical low-budget, high effort fashion.

Now, usually with a low-budget sci-fi film the story can be far more worthy and interesting than the attention to production, for obvious financial reasons. Code 8 is without doubt the other way around. The production level, relatively, far succeeds a story so predictable and worn out. The visual return, action and pacing are very well done. The first part of the film shows high grade city shots which wouldn’t look out of place in The Dark Knight. Then there’s cops, drones and automation folk who could easily be seen in District 9 or the Robocop remake. Its influences are obvious and many (the X-Men in particular) and the production return for its low budget is top class. However, theses scenes do soon become repetitive and worn out in a film, that after a watchable and mildly entertaining first hour, descends into a meandering television show sort of quality, short of ideas and with an ending so lacklustre and abrupt it annoyed me greatly.

I was wondering what material Quibi would be developing for its 10-minute programming and 10-minute stories/scenes in this Code 8 universe might actually be fairly watchable. Would it make me subscribe? Well, no, but if you take the first hour of this movie and made it into 10-minute segments it might be OK. Thing is, they have just done it but called it a feature film.

Chan is clearly a talented director and with all sci-fi, nailing the visuals is always key to the viewers immersion in the story. I hope to see his work on a more interesting and in-depth narrative soon but after a short, a feature and now a 10-minute episodic series coming on Quibi, I fear he will waste too long on his already tiring Code 8 universe.

Code 8 is perfect Netflix fodder but it lacks any, real originality. Despite it’s wonderful visuals it’s let down by a deteriorating narrative and poor final third.