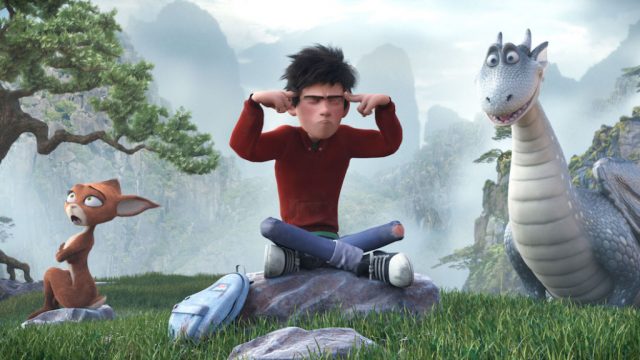 Sky Original animation Dragon Rider has landed on Sky Cinema in the UK.

When humans are about to destroy his family’s very last refuge, dragon Firedrake secretly sets off on an adventurous journey with forest brownie, Sorrel, to find the “Rim of Heaven”, the dragons’ mysterious haven. On their quest Firedrake and Sorrel encounter Ben, an orphan and stray, who claims to be a dragon rider.

The poster and marketing for this film is certainly a tad mystifying. Looking like a direct, cheap rip-off of another popular, well received and money-making Dragon riding animation, Dragon Rider is a bit similar, but actually vastly different enough to be unique. Now, the How to Train Your Dragon series is based on a 2003 book by English author Cressida Cowell, whereas Dragon Rider is based on German author Cornelia Funke’s 1997 book of the same name. Why the Dragon Rider folk didn’t try to go with a different style of poster (or even animation for that matter) to differentiate the two franchises a bit more, I will never know.

The films overall animation style fits somewhere between Zog and The Good Dinosaur. Neither, in the grand scheme of things, are ground-breaking or unique in today’s animation terms and the generic characters could frankly be out of anything but, to its credit, its well put together, happily and easily showcasing its wide range of mythology, characters and world building.

The film has a pretty strong, mostly British, voice cast too. Thomas Brodie-Sangster, Freddie Highmore, Felicity Jones, Patrick Stewart and Sanjeev Bhaskar all get a chance to showcase their voice talents, with Sir Pat seemingly relishing his baddie voice over work. Easily the best thing about the film is its voice direction. Low-budget animations are usually let down by either a lack of recognisable voices or simply poor syncing, intensity or clarity. None of this is present here as there’s a real good energy from all the animations voice cast and its certainly one of the standout things about the film production.

The comedy is certainly one of the oddest things in it. The humour is very hit and miss, venturing from slapstick to stating the obvious and I’m not sure who either is aimed at. There is however, a very well thought out section throwing shade at the ‘other’ dragon franchise which oddly made me chuckle. This section does however sadly show the limitations and ambition of the movie, with the source material deserving of better, instead of providing more homage to another film franchise.

Despite struggling to reach any real film highs, being a tad generic in its narrative, not having a solid enough finale and being yet another dose of animated Dragons, Dragon Rider is an easy, simple watch and a good bit of animated family fun. At 91 minutes long it sure doesn’t overstay its welcome and I’ve seen far worse things get a sequel and, if I’m being honest, I’d probably actually happily watch a sequel.

Dragon Rider is out now in the UK on Sky Cinema.