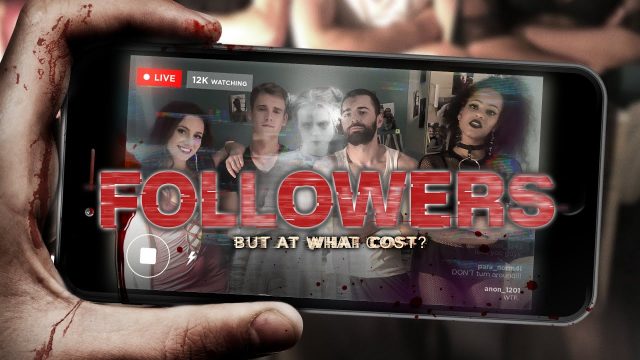 Jonty, a failing influencer with an ambition to reach over a million followers, will stop at nothing to become famous. A new start at University brings with it hopes of a resurgence in his popularity when a demonic presence appears in his student house. Jonty decides to stream his and his housemates experiences with this supernatural entity to gain the fame and fortune he’s most been craving. But at what cost?

Followers excels on being a social commentary for the internet age and the blog, vlog and screen-obsessed generation that was weened onto it. Mixed with the sadly normal desire for youths to be famous for fames sake, rather than for achieving anything us older folk would call real, Followers mixes this with a typical slice of student living, the weirdness of British culture all alongside a slither of the supernatural.

Mixing the virtual and supernatural worlds is an oddly weird and interesting narrative route, but it is one that’s being somewhat overdone at the moment. The film leans into and parodies aspects of the horror genre, and rather than being scary in itself, it uses this to further swipe at modern kids and their internet fascinations. The film touches on everything from simple privacy concerns and social etiquette to mental health and one-sided, transactional human relationships. There’s a lot going on, all blended together with an underlying supernatural mystery.

The films cast does seem to do a good job, working with what they have and portraying a sadly too familiar array of self-obsessed students all looking for their respective 15 minutes of internet fame. Although, it’s hard to say whether any of them can actually act in a serious manner because the shaky, found-footage way of filming makes every actor in such films seem somewhat over-the-top and hyperactive, meaning they could sit anywhere in the acting ability range between Tommy Wiseau and Tommy Lee Jones.

Harry Jarvis does portray with quite a bit of confidence the films annoying, wannabe YouTube star, with Daniel Cahill easily playing a stereotypical angry and drunk Scottish mature student. Erin Austen brings beauty and daddy issues to her role as the dim-witted love-interest, with Loreece Harrison probably producing the films best performance as the far more serious and most developed character.

The film is thankfully not solely reliant on the found footage format, but uses it well alongside some actual, non-shaky filming. The editing, props and visuals are well done, but this is no Avatar when it comes to presenting things that are not real. At times the film does look and feel like a cross between a Most Haunted spoof and an episode of Hollyoaks. There’s effort on show but just not enough originality with a topic and genre mish-mash that has recently been so overcooked.

The film does somewhat drift through a dreary, albeit it narratively important middle. The final part of the film sews together the well thought out plot points and produces some unexpected twists. Not that these are scary, or offer anything new to the genre, but they do tidy up and explain some of the weirdly presented backstories.

Overall, the film takes a good look at young people and their attachment to media, fame and phones. Although not the first film to try this, it does blend a few original ideas and genres together with good intent and cohesion. At times though, it’s just a little lacklustre and drifts along. The film seems happy to be nothing too wild or scary, and ends up rather unspecific and a little bit too general in its presentation and ideas.