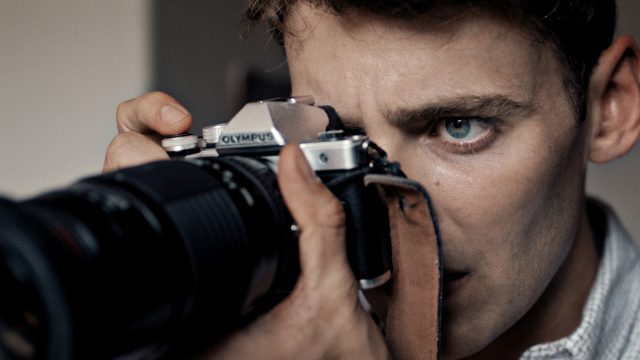 Karl, an aspiring photographer who has recently quit his job, is determined to take part in an amateur photography competition. Searching for inspiration, he starts to secretly photograph Cam, his beautiful and mysterious neighbour. This unconventional action creates friction between Karl and his best-friend Virginia, a young lawyer who doesn’t approve of Karl’s doing. As he continues to photograph Cam, their relationship grows sour, intensifying the discussions to the point of revealing differences in opinions about the morality of his actions, privacy and the way women are portrayed in modern society.

In a world where privacy is mostly focused on online issues such as hacking or identity fraud, it’s easy to forget that in the physical world there are still just as many viable privacy concerns. Framed takes a good look at such privacy issues, as well showing how the classic Men are from Venus and Girls are from Mars saying is still as true as ever.

As with any peeping Tom or neighbourhood stalker film, they are always and unquestionably compared to Hitchcock’s masterpiece Rear Window. Within the last two weeks alone Woman in the Window and Viewpoint have both been through the same comparative scrutiny, with both getting a mauling for not being Rear Window enough. There’s been many films from horror to romance that get the same Hitchcockian comparative treatment, which frankly seems to be a lazy way of judging a film on its individual merits.

Framed however, isn’t your average peeping Tom film. Karl, played by Thomas Law, may have a slightly skewed moral compass but it does come from a good, if not selfish place. Despite his grey thinking, there’s good black and white counterbalance from Lottie Amor’s character Virginia. Karl’s growing fascination becomes intense but never overly obsessive or too creepy as the tale unfolds. Virginia seems to be his righteous anchor and his sounding board, which only works to hasten their feelings for each other. As it progresses, it becomes less fascinated by external window antics and shows itself to be more of a wrong place, wrong time sort of film, with a good dollop of romance.

Oddly, the close and intimate visuals of the film, mixed with the open and frank dialogue, sort of makes it look like you are watching an episode of Made in Chelsea. I say that with the greatest of respect to those involved, but when my wife shockingly thought I was watching reality TV when I watched it, I couldn’t help but notice the blindingly obvious similarities myself.

Nick Rizzini, who self-produced, wrote and directed Framed, has allowed his actors to deliver incredibly natural performances which are wonderfully enabled by a flowing dialogue which has provided the right ingredients for their chemistry to shine. The film has a few twists and surprises too, making the performances and story blend together well, helping to keep the viewer interested until the end

All in all, the film is a well shot piece which is performed with an abundance of natural ability and subtle yet flirty chemistry. It’s a film which doesn’t try to be too clever, but offers a fresh perspective with its content and keeps it interesting with a well-paced narrative. It’s most definitely more of a drama than a full-blown-thriller, but I will certainly keep my eye out for more of Nick Rizzini’s work after such a watchable feature debut.

Framed is available to watch now on Prime Video.