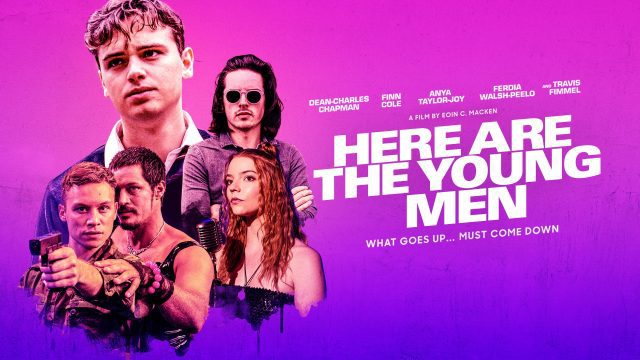 Dublin teenagers Matthew, nihilistic Rez, and the deranged Kearney, leave school to a social vacuum of drinking and drugs, falling into shocking acts of transgression.

Here Are The Young Men will certainly resonate with those us who, in years gone past, have been through a post-education summer. That summer where you seem to have money, hangovers are blasted away the magic of a bacon butty and you seem to have no real responsibilities at all. It certainly reminded me of those fond times, especially in the early stages of the film, when people have no real clue who they are or what they want to be, but they are free and unburdened by the ties of childhood, and looking adulthood straight in the eye.

The film centres around the tale of four young adults, played by Dean-Charles Chapman, Finn Cole, Ferdia Walsh-Peelo and Anya Taylor-Joy. It focuses on the decisions and mistakes they make, and its all acted out by a talented and well-known cast, with intensity and heart.

In the films lead role, Game of Thrones’ Chapman puts in a very solid turn, with his character having by far the most range to show. Cole has a more singular, if not juicier arc, and does a good job of being off-the-wall and equally repulsive when needed. Ferdia Walsh-Peelo probably has the least to do, but also has some tough segments which are all handled really well. Taylor-Joy always delivers, and yet again she puts in another impressive performance, showing once again how versatile and enigmatic she is as an actress.

There’s also notable back-up to the already starry cast, with the likes of Emmett J Scanlan, Ralph Ineson and Travis Fimmel popping up to show some serious variety and contrast to the youthful journeys on show.

The film also features an abundance of gameshow themed inner-thought dream type sequences. These take a dive into the minds of our leads, and while oddly entertaining, they do seem strange and out of place, and somewhat of a distraction to the more sensible narrative of the film.

The film certainly doesn’t hold back musically, having a killer soundtrack featuring the likes of Joy Division, Primal Scream and The Chemical Brothers. This pitches perfectly with providing a lively background narrative for this coming-of-age tale. Written and directed by Eoin Macken, the film is based on Rob Doyle’s book of the same name – itself named from the lyrics of a Joy Division song. The music is very appropriate, fitting and really helps to set the tone and feel of the film.

The film is certainly not an easy watch at times, nor does it portray young males (or even young people in general) in an overly positive light. Its hard-hitting narrative covers all manner of topics from substance abuse, sexual abuse, vandalism and suicide. The focus of the film is certainly not to be preachy, but more to be a cautionary tale to the dangers of drug use and the toll of circumstances and experiences on mental health and the human mind. It also puts forward a stark reminder of how society sees young males, and how these three young men process and deal with their experience in different ways.

Here Are The Young Men is a hard-hitting, intense and wild ride with genre inspirations from preceding films like Trainspotting et al. Whilst sometimes generic with its drug-fuelled film hedonism, and frankly odd with its gameshow considerations, it’s certainly an intriguing and engaging film to watch.

Signature Entertainment presents Here Are the Young Men on Digital Platforms in the UK from 30th April, with the film arriving on DVD from May 10th, 2021.