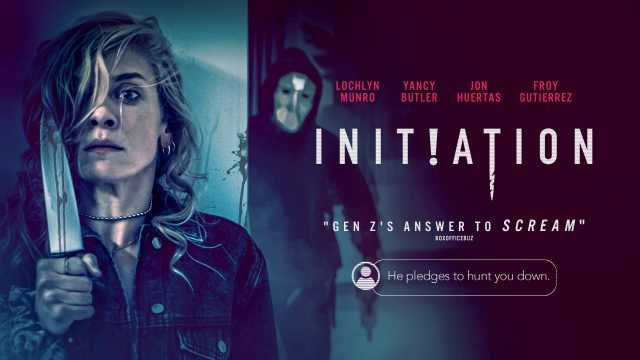 Whiton University unravels the night a star-athlete is murdered, kicking off a spree of social media slayings that force students to uncover the truth behind the school’s hidden secrets and the horrifying meaning of an exclamation point.

The film is co-written and directed by John Barardo, and despite its slashery billing, it’s more of a relevant teen drama, than a full-blown slasher-horror. That’s not to say that that’s entirely a bad thing, far from it. The films refreshing and inventive way of dragging an audience to its more classic horror/slasher elements is certainly an interesting way to go.

In the me-too/comeuppance era, and with the examination of privilege in full flow, the films subject matter and narrative is somewhat topical and on-point. With that in mind, the films performances, reactions and general subject matter are sadly far more noteworthy and memorable than any horror elements seen in the film.

I mean, yes, there’s still some classic horror sound effects and tension, and a more than passing homage to genuine and spoof films of the late 90’s. None of it though, is unique or memorable, yet there is still a lingering freshness to the presentation and narrative.

The whole film is all held together with an impressive acting performance from co-writer Lindsay LaVanchy. She really goes through the emotional range in the film, and clearly has a slice of acting ability. She’s not alone is giving a pretty solid performance either, as she has able support from the likes of Froy Gutierrez, Isabella Gomez and Shireen Lai.

The final twenty minutes are when the film really reaches its long-drawn out potential, giving an eerily predictable, yet still surprising ending. The intricate narrative gets left behind and descends into the typical scares you’d expect from a film featuring a bunch of teens with a killer on the loose.

It’s genuinely pleasing to see a slash-billed film not take you down the route you expect. While this wont appeal or please the average gore/Saw crowd, it’s a solid film for those who enjoy a teen horror with a bit of a story.

Signature Entertainment presents Initiation on DVD and Digital Platforms in the UK from 24th May, 2021.