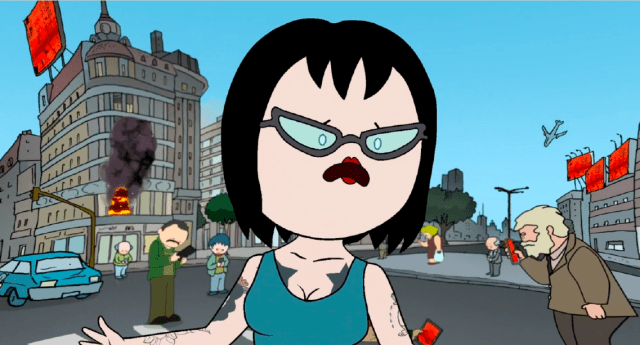 It’s not often that you get to watch a film length adult targeted animation. It’s even rarer, and frankly far more initially intriguing, when you get to see one that bills itself as a giant-cats-invading-earth type of movie.

Despite sharing its name with another well-known animation, this is no volcanic love-story made by Disney. This film revolves around tattoo artist Deborah and her friends. While happily enjoying a binge-watching session of their favourite TV show, a scene ripped from Man of Steel occurs, ultimately leading to an invasion by giant cats. Along the way, a comic book comes into her possession, not only predicting the cataclysmic events, but also advising her on how to survive them. This strange, wacky, offbeat tale then takes you on a journey of disaster, death and dating, with a splash of cats, witches and a giant snake. It’s all rather offbeat and peculiar.

The film takes great pleasure in depicting the central character Deborah (voiced by Primetime Emmy-nominated actress and comedian, Janeane Garofalo) as a strong female lead, but then sadly sends her down a path with the usual stereotypical movie flaws of self-doubt and a lack of worthiness. It sadly diminishes any interest in the character, and hastens the films decline towards its final resting place. The rest of the characters are reminiscent of all manner of people you come across in life, with the film taking a broad brush to the peculiarity of human beings in general.

Whilst creating a rich world, with these interesting and relatable characters, its originality is badly let down by its lack of humorous adult comedy. At times is seems to be heading somewhere interesting, but not even breaking the fourth wall can liven it up into something noteworthy past its initial quirkiness and offbeat animated appeal. Even the initial anticipation of giant cats is soon lost as bad dialogue and boring narrative quickly moves on to even less intriguing pastures.

Directed by Ayar Blasco, a man who is no stranger to animation after helming El Sol, the film has a unique and quirky animation style, which I can only place somewhere on the animation scale between Hilda, Beavis and Butthead and South Park. It contains homage and admiration to comic books, and their impact, while also taking aim at societies addiction to screens and popular culture series. It has a vast array of mythical and strange creatures, people and narrative yet remains, on the most part, really rather uninspiring.

Sadly, the biggest problem I found with Lava, wasn’t its style or substance, but simply its point. Who is this for? Why isn’t it funny? What is its point? It seems like a simple hour-long pet project. Something that’s deeply emotional, satisfying and wonderful to its creators but simply not connectable enough for others to invest in. I’m sure many will like it, it has many good points, but its uniqueness is only equal to its ability to disappoint.

‘Shang-Chi and the Legend of the Ten Rings’ Film Review.

The animated League of Legends spin-off ‘Arcane’ gets a new trailer...

Kristen Stewart stars in the new trailer for ‘Spencer’.