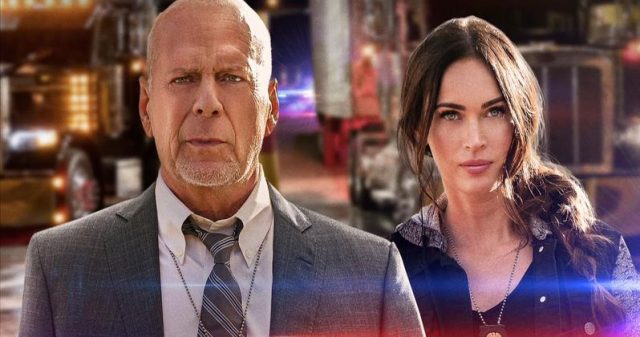 While in Florida working on a sting operation to catch a predator who has been targeting sex workers, FBI agents Helter (Willis) and Lombardo (Fox) cross paths with state cop Crawford (Hirsch), who’s investigating a separate string of female murders that appear to be related. Lombardo and Crawford team up to set a trap for the killer, with Lombardo putting her life on the line to act as the bait. When the off-the-books operation goes horribly wrong, Lombardo is plunged into grave danger and Crawford finds himself pitted against a serial killer in a twisted game of cat and mouse…

Randall Emmett, best known for his extensive producing credits, directs his first feature which is based on the real events of the Truck Stop Killer from the US town of Pensacola. Alan Horsnail’s screenplay of those events leaves a lot to be desired, offering glimpses of genuine intrigue and interesting character set-up, only to strangle the life out of them moments later.

The film does start with promise and some familiarity, but it soon ebbs away. It’s a curious screenplay or feature for Emmett to pick to be his directorial debut. The pincer movement to get the leads together is somewhat laboured but nicely done in a stereotypical 90’s film sort of way. The whole movie has a 90’s sort of feel, especially in the way that it’s outdated and below the expectation level of modern audiences. When we have things floating about like season one of True Detective or even Mare of Easttown, a boring, badly acted cop chasing a serial killer type of movie is pretty unnecessary to not only make, but also to watch.

As for the cast, Bruce Willis plays his part like the fifth usher at a wedding. Quite simply, he’s just there to make up the numbers, offering very little to proceedings but a bit of name recognition and his face on the poster.

Fox tries with her out-of-character role as an undercover cop, but this really isn’t her type of film. It’s light on comedy, or teenage boys to camera flirt to, and it seems that she is purely in it to give her current beau Colson Baker (better known as rapper Machine Gun Kelly), a film role. Sistine Rose Stallone also has a small role, but its one she will probably never mention again.

Hirsh is by far the best of the serious actor bunch, but his thin Jack Black look, makes him simply too weak looking and disengaging to be taken seriously. Lukas Haas gives it his all in the villain stakes, but it’s a simplistic and generic role that can only be taken so far.

There’s really no singular reason why Midnight in the Switchgrass swings and misses so badly. There’s nothing fundamentally wrong with it on paper but it’s simply let down by a lack of visual intensity and poor execution. Its aiming to be a bog standard serial killer flick, but its generic, low impact acting, uninspiring narrative, editing choices and direction, has simply left it circling the drain. It’s just not clever or suspenseful, nor is it even entertaining. It’s just so devoid of on-screen effort, happy to coast by purely on the recognisable talent involved.

Midnight in the Switchgrass is available on Digital Download in the UK from August 13th, and DVD from August 16th from Lionsgate UK.