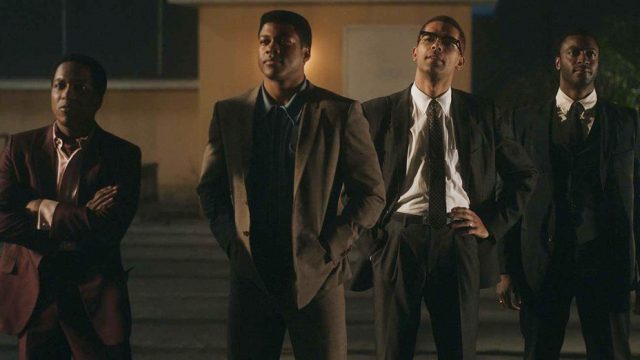 It’s always been my belief that it’s far easier to write a review about a film that’s bad. There are so many more descriptive words to that are available to use for bad films, and so many routes to go down where you can state why you found it terrible. It’s actually really hard to be unique, trying to offer a different perspective on a film that is anything remotely good.

For that reason, One Night in Miami is a very simple review for me to write. There’s really not really much to say about it that hasn’t been said already by practically every reviewer who has watched it.

The film is based on Kemp Powers play which tells the fictionalized account of a meeting of Malcolm X, Muhammad Ali, Jim Brown, and Sam Cooke in a room at the Hampton House in February 1964, hours after Ali’s surprise title win over Sonny Liston. Powers also wrote the screenplay for the film and it shows the four black icons trying to reconcile their private lives with their public spheres.

The film certainly doesn’t hold back on showing these powerful black icons questioning their own legacies, ideologies and impact, as well as showing some of the racism and prejudices they faced. It’s wonderfully done in a very natural way, showing how these men try to rise above it, creating their own legacies for their own very different reasons.

Quite simply, One Night in Miami is many things a good film should be. It’s well directed, well scripted with many excellent performances. It does on occasion feel as though it’s a play, with its dialogue and confined location suited more for the stage, but there’s just such power in the films simplicity and subsequent intensity.

The four icons are played by Kingsley Ben-Adir, Eli Goree, Aldis Hodge and Leslie Odom Jr. All of them are all excellent, portraying their very different characters with plenty of authority and charisma. As ever, anything with Lance Reddick in is raised a hefty notch. Kingsley Ben-Adir probably shows the greatest and most intense portrayal, and he may even win an award or two for his take on Malcolm X.

Although the films director, Regina King, has helmed multiple TV show episodes and a few TV films, this is her feature directorial debut. Her acting history, from The Big Bang Theory, Southland, The Leftovers and Watchmen, has clearly given her experience in seeing intense characters brought to life and showcasing human nature in all its raw glory. Not many directors can get four top-draw performances out of a cast, and this is done in such a pleasant way, where all of them get a chance to shine, with no one stepping on another’s toes. It’s certainly an interesting idea, and a bold choice for a feature debut, but what she has achieved in pulling off such performance intensity is extraordinary.

One Night in Miami is a great feature debut filled with captivating and intense performances.

One Night in Miami is available to watch now on Prime Video.