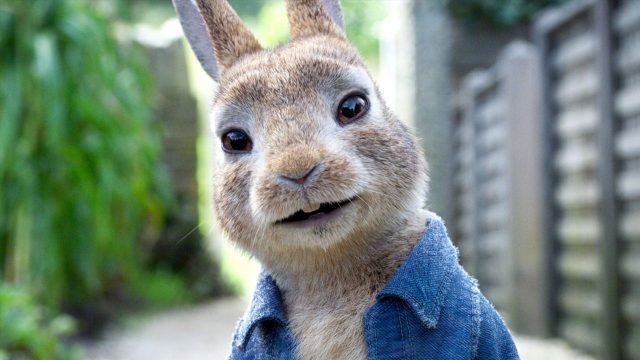 Thomas and Bea are now married and living with Peter and his rabbit family. Bored of life in the garden, Peter goes to the big city, where he meets shady characters and ends up creating chaos for the whole family.

The very best thing about Peter Rabbit 2: The Runaway it that it’s so unexpectedly good. Despite the film having been delayed by a year, this is the same film version that should have hit big screens in Easter 2020, a mere two years after its predecessor. With only a two-year turnaround, for a heavy CGI film, you might be forgiven for thinking that the film may be rushed and badly formulated, but you would happily be very wrong to think so.

While the first half of the film feels ever so slightly disjointed and without a clear direction, it all sort of comes together like a hard, messy jig-saw that gets quicker to piece together as it nears the end, and is so satisfying to finish. There’s just so much in the film bearing in mind it’s only 90 minutes or so long. The films (cotton) tail is well-worked and incredibly well set-up to leave the audience satisfied and possibly wanting more.

Director Will Gluck has a history of making good films and here, with the observational comedy and self-reflective nature of his work, there seems to be a perfect alliance between a CGI rabbits and good writing. There’s a load of popular culture and film influences on show too, from classic heist films, James Bond-esque getaways as well as a good dose of Dickens.

The voice cast all do a great job too. James Corden is unbearably and annoyingly good as loveable rogue Peter, with the rest of the voice cast, such as Elizabeth Debicki, Lennie James, Margot Robbie and Aimee Horne (Daisy Ridley did not return), all adding a good dose of emotion or light-hearted relief. Domhnall Gleeson, Rose Byrne and David Oyelowo all work solidly with the CGI and, at times, show some good chemistry, even if their comedy falls a little flat at times.

That said, there is some awful human based CGI, but its deliberately bad for comedic purposes. It just goes to indicate how carefree and self-aware the whole thing is. Clearly the cast and crew were slightly amazed they got a sequel in the first place, so they’ve given it a “what the heck” approach to both the films side-swipe and self-deprecating comedy, as well as its overall narrative.

It’s also a film with two villains, but not in your obvious and one-dimensional way. The film, with all its self-awareness and tongue in cheek jokes, actually has an obvious, non-scary villain for the kids, as well as a capitalist villain for adults. It enables the jokes to hit their mark for the adults, while the silliness keeps the younger audiences engaged.

Purist Peter Rabbit fans will undoubtedly feel less than satisfied with the film as it’s a long way from the classic Peter Rabbit tales, or even the first film for that matter. Haters of James Corden (and boy are there many) will also probably get sick of his voice (and comedy) too, but when you look beyond that, at what it is, its an entertaining family film (for 4 years plus) with a little bit of something for everyone.

Overall, it’s cleverer, and arguably funnier than it’s predecessor, but sadly lacks some of the original charm of the first.

‘The Suicide Squad’ gets another new trailer.