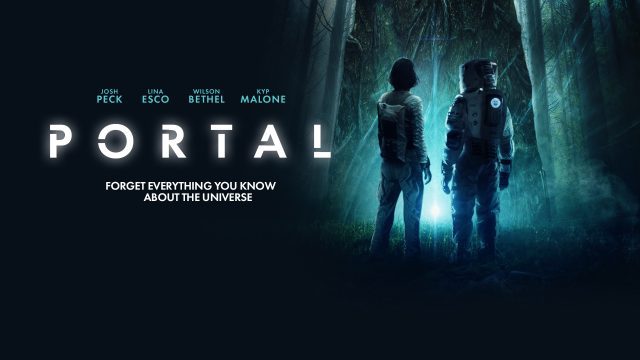 Portal (Formerly known as Doors) is a sci-fi thriller by the team that brought you V/H/S, Sea Fever and Becky. When millions of mysterious, alien “doors” appear suddenly around the globe, individuals from all walks of life must come together to discover what these doors are, where they lead, and if they can–or should–attempt to cross to the other side.

Written and directed by Jeff Desom, Saman Kesh and Dugan O’Neal, the narrative segmentation and individual storytelling each director oversees works well in regards to the film being inventive, showing the scope and range of effects the “doors” have on people. This helps to push the narrative along, but it also makes the film somewhat disjointed, leaving stories with a half-told and disconnected feel, and the viewer saddled with too much confusion.

Its actually very surprising that the film leaves you confused, with half-answered questions, bearing in mind that they annoyingly try to explain half of what’s going on in text form on the screen as the story progresses. It’s almost like they edited it with text markers and thought, “what the heck, we’ll just leave them in there”.

Although the film is not dripping in well-known talent, there are the likes of Josh Peck (Drake & Josh, Mean Creek), Wilson Bethel (Daredevil, Hart of Dixie) and Lina Esco (Kingdom, S.W.A.T.) amongst the cast. In truth, there are no serious flaws to any of the casting choices, or their performances, especially when you take into consideration what they have to work with.

On a more positive note, there’s some good imagery and ideas on show here, as well as well executed special effects, respectful homage to classic sci-fi, and some well-above average cinematography.

Overall, the film starts as an interesting and engaging piece, with an occasional, creepy and eerie feel to it, but sadly it soon starts to show off its many, many flaws. In its simple potential and desire, it’s a fantastic addition to the sci-fi genre, but its overall conceptualisation can only be considered a giant mis-fire. There’s a really good idea here, and serious potential, its just been done in such a limiting and strange way that it leaves you thoroughly underwhelmed.

Portal is yet another interesting sci-fi concept which could easily translate into a television series. As a film though, made in this format, there’s just so many loose threads, half-baked character development and missed-ideas, and all it leaves you with is a gaping void of disappointment. The film is simply another in a growing line of underdeveloped and somewhat unappealing films that are co-produced by website Bloody Disgusting.