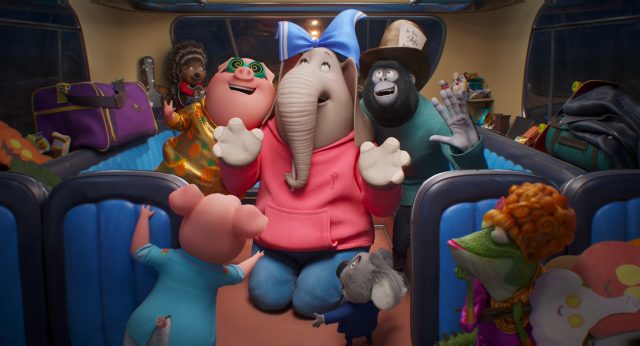 Can-do koala Buster Moon and his all-star cast of animal performers prepare to launch a dazzling stage extravaganza in the glittering entertainment capital of the world. There’s just one hitch — he has to find and persuade the world’s most reclusive rock star to join them. What begins as Buster’s dream of big-time success soon becomes an emotional reminder of the power of music to heal even the most broken heart.

The film follows a similar path to another cute and cuddly singing film franchise with a sequel somewhat skew-whiffed away from the tight narrative of the first one. This same format, with an overabundant use of music over storyline, works far better here though, serving as a welcome distraction from the frantic, rushed narrative of the first part of the film. The film does settle down after the first act and seems a bit more straightforward, with some interesting character development and the emergence of a more typical animated villain.

Unsurprisingly for a film called Sing, the films music is quite superb. It’s a smorgasbord of bangers mixed with an abundance of well-known emotive singalong tunes. Blended with the excellent voiceover work of returning stars Matthew McConaughey, Reese Witherspoon, Scarlett Johansson and Taron Egerton, mixed with franchise newcomers Halsey, Bobby Cannavale, Letitia Wright, Bono and Adam Buxton, and you actually get a very enjoyable and somewhat easy watch.

Director and writer Garth Jennings follows on from the first Sing film with another loud, vibrant and emotive animation. The film is typically upbeat and does build on the underdog traditions seen in the first movie. It tries to upscale, offering some big themes, and while mostly successful in this, there’s just a bit too grand a scope at times and a few too many questions, mostly centred around the oddly done and quite plot-central Clay Calloway story.

There’s just a lot of fun (and a few laughs) to be had with this fast-paced, music-filled, family fun flick. Yes, it’s musically better than it’s outdated storyline elements, but it’s just a solid yet somewhat forgettable family watch with something in there for the kids as well as the supervising adults.

Another sequel would not surprise me but I think the franchise in this format has sung its last song.