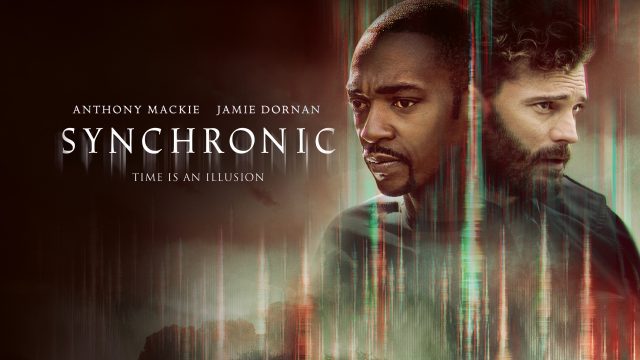 Now, time-travel is always a good go-to when it comes to sci-fi, and original and innovative takes on it are always very welcome. Synchronic is essentially a time-travelling missing persons story which gave me vibes from things like The Butterfly Effect and Quantum Leap. The film does take quite a while to get to the cut and thrust of proceedings (well, about forty minutes) but it arrives in an interesting place, albeit it with very limited scope. This is kept very small in scale, centred around Mackie’s characters hunt for his friends missing daughter.

Written by Justin Benson and directed alongside Aaron Moorhead, they have done a sterling job with Synchronic. There’s some good action in there and a good dollop of emotion, to go with some solid visuals and location work. In their capable hands the film happily gets genre mashed along the way, never straying too far from where you want it to be.

There’s plenty of interesting themes explored, as visits to the past are always going to be somewhat tricky for our lead character – for obvious reasons! These reflections and observations are key to the characters journey and are handled incredibly well, keeping it entertaining, as well as pushing the narrative along.

One thing that did strike me though, was the almost severe lack of chemistry between the leads. Dorman seemingly had the constant need to over-exaggerate and overact which I found tedious and off-putting. I did see one review describe his performance as serviceable, which I thought was a smashing (and somewhat perfect) back-handed compliment. Luckily, in screen-time terms, he plays more of a main supporting role with the film lead by Anthony Mackie. Mackie has been a busy boy of late and while never excelling in Oscar winning intensity or performance, nor rarely offering anything fresh or new, he certainly is Mr. Consistent when it comes to action flicks, which in itself is no bad thing.

Synchronic is the sort of thing that Syfy would adapt into a ten-episode series to really flesh out things and expand the potential. It’s a an interesting, somewhat fresh take on a familiar sounding idea, but it just felt like there was too much meat left on the bone, with a bit of a hard knuckle at the end to go with it. Overall, I just think a little bit less budget spent on the stars, and more on fleshing things out, would have been a better route to go in terms of delivering a better film.

Signature Entertainment presents Synchronic on Digital Platforms in the UK from March 29th, 2021.