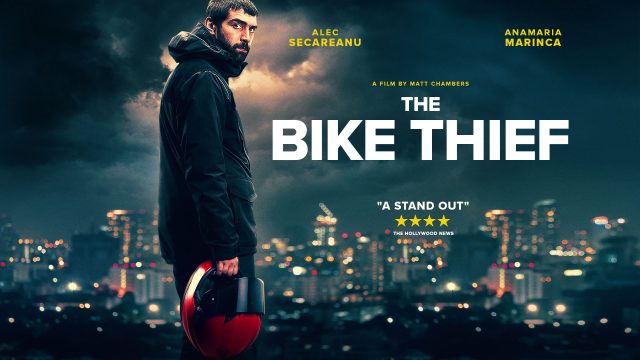 ‘The Rider’ is an ordinary, hard-working Romanian man living in London, doing what he can to protect and support his family. He works as a delivery driver for a local Pizza restaurant, which happens to be owned and run by his landlord. His wife, Elena, spends her days cleaning grand houses and caring for their two children. When ‘The Rider’ has his moped stolen, his world turns upside down and so begins a race against time to recover the source of his livelihood.

The film starts off by grounding and immersing the audience into the life of ‘The Rider’, showing how hard-working he is and how important his bike is to him. As we move on, we find out just how important the bike is to his family too, and how central it is to their routines and way of working. For those who work in the gig-economy, where you have to rely on your wits, talents and tools of the trade, to have one taken away from you means you can’t work. As we all know, if you can’t work, you can’t pay your bills or feed your family. The film sets this scenario up brilliantly, building tension, examining social divides and immigration, all the while continuing to stress the importance of the bike onto the audience. The pain and sorrow of the family’s situation is a cinematic reminder to those who may be fortunate enough to forget the millions of families in the UK living hand-to-mouth, scraping by.

The film offers some wonderfully crafted road footage from award-winning cinematographer Nanu Segal, showcasing the hustle and bustle of London road life. It’s immersive and takes us on a journey through the views and trials of a city-working delivery driver. It makes you feel invested in ‘The Rider’ and his life, and curious about his daily life and fortunes. The film also carries a pretty decent original soundtrack too by Mercury Prize winner Graham Hastings of Scottish band Young Fathers.

Alec Secareanu gives a splendid performance as our central character, showing emotion, heart, strength and vulnerability, as his character goes through the panic and the subsequent desperate emotions of his situation. Anamaria Marinca is equally as good as his wife, but sadly lacks the screen time she deserves. The rest of the cast, such as Lucian Msamati, are pretty pitch-perfect in regard to their casting and performances, each adding something worthwhile to proceedings.

The films slow-crawl narrative is absorbing and moreish, and there’s real low-key character development at play. It’s a refreshing piece and a real slice of life.

That said, the film’s final act doesn’t exactly leave a well rounded off story. For all the wonderful set-up, and intensely drawn-out narrative, the film’s final resolution is too hasty and without sufficient intensity. It’s a wonderful film, until it’s let down by final few minutes, which simply seem rushed, out of concept and frankly unwarranted. All the intensity of his moral compass being stretched just doesn’t seem to fit with the ending we got, and even if the ending was as desired by Writer/Director Matt Chambers, the rounding off of other parts of the narrative is clearly forgotten as the viewer is left unsure of the message, or the whole point of the thing.

Chambers has turned his debut feature into an involving and absorbing story with a gritty, natural and honest feel. It’s truly sixty-odd minutes of wonderful film, that’s unfortunately been let down by the final few minutes of its oddly worked (and frankly annoying) finale.

Signature Entertainment presents The Bike Thief on Digital Platforms from May 3rd.