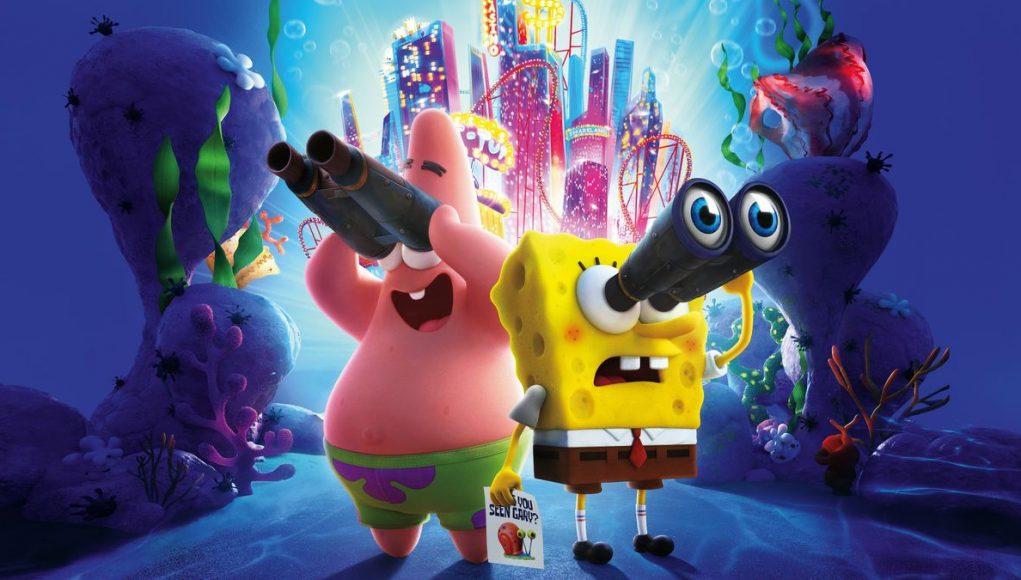 SpongeBob is back in The SpongeBob Movie: Sponge on the Run. This time around, after his beloved pet snail Gary is snail-napped, he and Patrick embark on an epic adventure to The Lost City of Atlantic City to bring Gary home.

I never really understood the hype around SpongeBob until my daughter got interested in it. As children often do, SpongeBob got put on at every opportunity, and just like Pepper Pig before it, I endured episode after episode until I got to know the little yellow sponge fairly well.

The early episodes of Mr SquarePants were a real treat. Just like The Simpsons, the jokes were daft and off-beat yet thoroughly observant in nature. Daft, silly and irreverent was what SpongeBob delivered, it was enjoyable and a good bit of wholesome family entertainment. Then after a few seasons it starts to get quite repetitive. The same stories got re-hashed only with a twist and SpongeBobian history got re-written and re-written over again as ideas dried up. Then the humour changed, sometimes for the better, mostly for the not as SpongeBob starting becoming as stale as old bread

The latest film run-out for SpongeBob is certainly not bad, it just lacks true originality and the full on Bikini Bottom flavour I had hoped for. For those new to the franchise, such as children in their SpongeBob watching infancy, this will be a fine film. For those with a more seasoned experience of SpongeBob, including my daughter, it’s just very moderate fodder. It’s all cute and cuddly and shows a lot more heart than normal SpongeBob, with a real emphasis on friendship and togetherness. That though, is half the problem. A daft, silly cultural phenomenon has been turned into a full-blown kid’s film. There’s little originality on show and little in the form of the more advanced humour older watchers will desire. SpongeBob was never solely meant for kids, simply for kiddish minds.

The films writer/director Tim Hill is a seasoned SpongeBobian having been around the franchise for many a year. He has a wide range of directing credits too including Alvin and the Chipmunks, Hop, Muppets from Space and Garfield 2. All of those films have good family humour in them but also a comedy edge for watching adults. This polished, child friendly version of SpongeBob is all new and cute and designed to appeal to newly watching children. All this does is take away from the classic simpleness and unique oddity of SpongeBob, presenting itself as all too proper, kidified and professional looking.

There are some good things about the film. Obviously, the voice work is great (as usual) and, as per, there’s a few good cameos but special praise must go to Keanu Reeves, who is by far the best thing in it. He actually shows some range and links the whole thing together with prowess and humour.

The last film, The SpongeBob Movie: Sponge Out of Water, brought back original creator Stephen Hillenburg and it had an ounce of freshness about it and a moderate SpongeBob feel. With the original The SpongeBob Movie getting a fan remake, the SpongeBob game getting a rehydration, and with this film being so child friendly it should be classed as a soft re-boot, I fear that the SpongeBob we know and love has run its course. The franchise is now in the hands of money men who simply want to sell toys and movie tickets to toddlers. Sadly, all this film is, is an all too familiar middling and mainstream SpongeBob adventure lacking the original dynamism and quaint strangeness needed to make it an actual SpongeBob movie. Albeit cute and heart-warming to children, it’s too far from the smart off-beat cult classic we know and love.

Hillenburg wanted it to end at it’s prime and, in hindsight, he was right. Since he is no longer with us, let’s just leave it be. The franchise has clearly run out of ideas, lacks originality and is seemingly all dried up, needing a do not hydrate order putting on it.

After COVID scuppered its cinematic plans, The SpongeBob Movie: Sponge on the Run has now landed on Netflix UK, as well as in other selected territories.