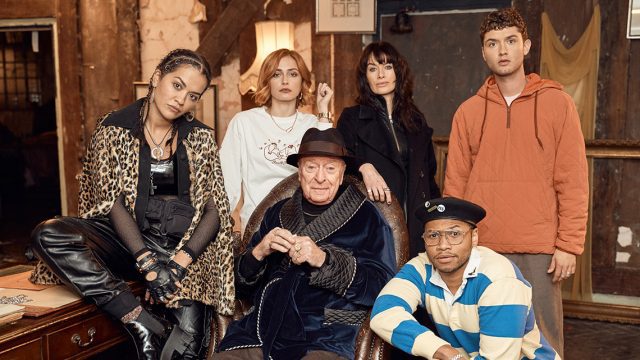 Like any old book that’s now free to pillage by TV and film studios, Charles Dickens’ Oliver Twist has gotten itself another reimagining, this time as a Sky Original.

The Twist here though, to pardon the awful pun, is that apart from the character names, this film barely has anything to do with the classic Dickens tale. It may be set in London, but it shares far more resemblance to some wannabe Guy Richie movie crossed over with Robin Hood. Frankly, I’m really not sure it knows what it is, and I’m pretty damn sure it doesn’t care either.

This modern-day tale is set in the teeming heartland of modern London, where a group of street-smart young hustlers plan the heist of the century for the ultimate payday.

I think the intention was to make a smart, lively, fresh action heist, you know, a bit part Hustle mixed with Oceans 11. Instead, it’s ended up as something that BBC Three would have put out and immediately regretted due to #defundtheBBC trending for the next week or so.

Mixed up in all the twistiness is an abundance of freerunning (or parkour) and twirly camera shots. They seem to have taken Twist and put as many physical twists and twirls in as possible. Maybe it’s to distract from the awfulness, but it simply ends up rooftops and Mary Poppins, and all a bit bobbins. It’s very modern film school impressive with the visuals, but frankly pathetic for an allegedly original, high-quality production.

Newcomer, Raff Law, very much reminded me of his father, Jude, from some of his early roles. Not in a good way mind, just that he too was wooden, bland, sometimes vacant and only there for his looks. He plays our lead, an orphaned graffiti spraying artist, and frankly his role is just so very odd and uninspired. That said, he is woefully let down by a story so lacklustre and unwarranted.

I mean, this film is so bad that David Walliams isn’t the worst thing in it. After a very misplaced Leigh Francis cameo, the poor-quality acting continues, with layer after layer of oddly justified characters and performances. Reetah Orah is oddly cast, yet not actually as terrible as you can imagine, whereas Lena Headey plays a real bargain basement baddie called ‘Sikes’ and is woefully let down by her dreadful dialogue and lack of screen-time. Michael Caine spends most of his time sitting again and, even if he didn’t have problems standing, I doubt he would have bothered to waste much energy on this dross.

Noel Clarke and Sophie Simnett are probably the two best things in it, but frankly the whole thing kicks up a stink so bad that it should come with a nostril warning. It’s just so unnecessary. The whole thing would have been much freer and interesting if it were not tied to Oliver Twist and certainly better in the originality stakes. Gender flipping and modernising for the sake of it may be the modern thing to do, but its just so very unoriginal to do it without good reason and without sufficient character development.

If you can stomach the first half hour and watch until the end you certainly won’t be disappointed. Instead, you will be angry with yourself, wondering why you didn’t rightly turn it off after 2 minutes.

Sky recently announced, in an effort to keep up with Prime and Netflix etc., that they would be commissioning more original films and shows. Netflix began their rush for original programming with a somewhat gung-ho approach and commissioned all manner of tripe. It sadly seems that Sky are doing the same. Fresh and original content is one thing, waste of time films like this are another.