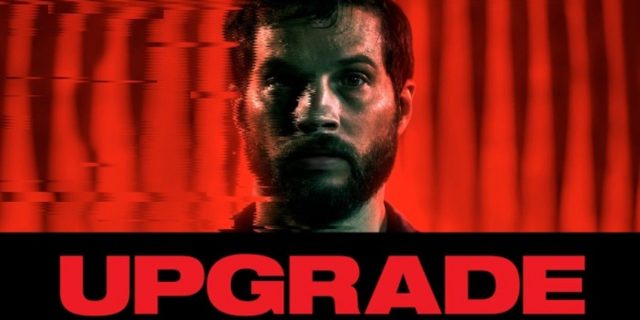 Upgrade has a story laid out so predictably that it was the entire reason why it took me so long to get around to watching it. Set in the near-future, we have a man, who likes old things. He lives in a world of new technology which isn’t really his cup of tea. Tragedy strikes, his world is turned upside down but, shock horror, this new technology could help him with his life and on the path to revenge.

The story and themes in Upgrade are certainly not unique, with familiar and somewhat overdone AI/enhanced person drudgery almost spoiling a well-executed lead performance and visual effort. Thankfully the fast pace and short run-time allows the film to flow and hit new, more interesting points before the aroma of sci-fi sameness infiltrates the nostrils.

Credit must go to Leigh Whannell, who serves as director and writer for the film, as some of the action scenes he produces borders on unique, if not inventive, with more than a touch of humour thrown in. The jagged shaky camera action and fights, along with the internal narrative, makes it feel like illegitimate film child of Venom, crossed with what you would hope to see in a Blue Beetle movie. These segments of action really up the interest count, taking the film from simply being a tepid sci-fi movie, to mixing it in parts into a sadistic comedy revenge film.

The films lead, Logan Marshall-Green, has always been an odd actor. Blessed with looks, age and style similar to the likes of Tom Hardy, Jai Courtney, Joel Kinnaman, Sam Worthington and Jeremy Renner he has never quite upped his level to be a leading man in a big budget movie. Whilst others have had runs of good roles, peaks and troughs of big budget successes and failures he seems to be stuck at being a movie sidekick or television actor. Being more of an usher than a groom may suit some, but there’s probably a really good role out there for him which will take him onto the next alphabetic level in the celebrity pecking order. He does an admirable job in Upgrade as the entire movie centres entirely around his character. He is more than believable, competent and capable at showing his acting skills in the three phases of his characters arc. Husband, paraplegic and enhanced are all pulled off with ease on his characters narrative path. The rest of the cast are what you might politely call “average”. The benefit of this however is that is that it allows Marshall-Green to look even better. The bad guys are hammy, generic and overacted but it sort of works to be all the better for it.

Just like Code-8, which got a Quibi series orders, Blumhouse is set to produce an Upgrade spin-off television series. Rumoured to be set a few years after the events of this film, it will act as a sort of sequel, set in this film’s universe but with a new host. I imagine this will play out sort of like what they did with the Limitless TV show.  The concepts here are not new but handled right, with the right lead, the show has the possibility to be a couple of seasons wonder. It seems like there has never been a better time in Hollywood to have a moderately interesting sci-fi idea.

Upgrade is a low budget film (a rumoured $5 million) but it’s certainly not low on watchability. The best thing about it is the expectation level. I never expected it to be so entertaining, so humorous and so satisfying at the same time. I really should have watched it before now but its even better to find it to be a diamond in the rough.