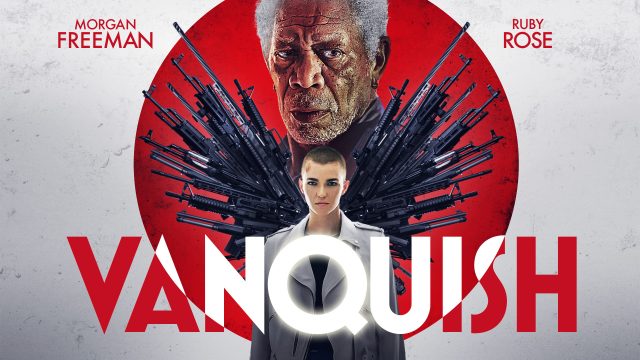 Morgan Freeman plays a dirty former police commissioner who blackmails his generic enforcer/dogsbody, played by Ruby Rose, by kidnapping her daughter and forcing her into her old job — doing five very dangerous cash collections in one night. Crushed by the betrayal from the only man she ever trusted, Victoria fights her way through a sea of drug dealers and underworld thugs on a mission to save her daughter.

There’s a giant giveaway in the first few minutes of Vanquish which gives you the tone of how things are going to go. The film takes an age to even begin to drag its sorry little ass onto the screen, announcing numerous production companies whilst showing random narrative and stock footage images. Bearing in mind the entire run-time of the film is only 94 minutes, over 6 minutes of this dragged-out opening is enough to tell you that this film is short on quality, rich on random filler.

Bearing in mind there’s a good 5 minutes at the end too, this piece barely has 85 minutes of actual film. The entire editing, storytelling and imagery in this opening segment is truly shocking. It’s like something a blind, drunk, timewasting plague-ridden rat could have done a better job of. It just drags on and on, slapping photoshopped Morgan Freeman images at you, slowly sapping the sheer life out of you.

After the intro has perplexed, bamboozled and bored you, it continues to disillusion and disengage the viewer, dragging its very low bar and scraping it firmly along the ground. The first 20 minutes or so sets a terrible tone that is hard to get past. That said, if you do stick around it does get slightly better, but is still a truly pathetic action film.

Better known for being a writer (and oddly a fairly good one at that) director George Gallo delivers such a bamboozling film. There’s weird in-and-out of focus twisty camera shots making large parts of it look like a social media post by a kitchen company. When this isn’t happening there’s a wonderful blurred yellow-tone splattered about, and its truly all kinds of wrong.

The cinematography, sound, editing, dialogue, casting, story and its performances are all utterly diabolical. Standard action sequences in this flick consist of some intense, low-budget, no damage bike chases that have about as much tension in them as a wet piece of cheap kitchen roll.

As for the cast, I didn’t actually think it was possible for Morgan Freeman to be stone cold bad in a film. Sadly, even he can’t act his way out of this tripe-fest. Looking like a cheap Lincoln Rhymes, his all-watching villain role is just odd and unwarranted. There’s just no malice in Dear Old Morgan and he’s truly forgettable and completely miscast. It’s sad – no tragic – that he is even in it. If he’s short of money there must be better things for him to do. Do YouTube adverts with Roger Federer or something – anything but this.

As for Ruby Rose, who seems to be in everything these days, she’s mostly utterly as expected, but actually sometimes even worse than her very limited acting ability can muster. Apart from the obvious tick-box of diversity and mild name recognition she brings, there must be better actresses out there who can still tick the diversity boxes and actually produce on screen. If not, then drama schools should really make more of an effort, and casting directors should start working a lot harder.

I don’t even think I understand what influences or decade its inspired by either, and frankly, I don’t think the film knows or even cares. Some scenes have an 80’s aesthetic, some 90’s and some are more modern. The whole thing is just a giant clusterfuck of stuff, all shoved together like a badly made Ikea wardrobe, with a load of Ronseal painted over it cover up the woodenness of the acting and hide the mess of it all.

It’s not even on the same planet as any film that’s got the coveted “so bad its good” vibe. It’s just plain and simple bad. It’s rotten all over, badly done and generic as hell.

Frankly, I never want to see a movie this bad ever again.