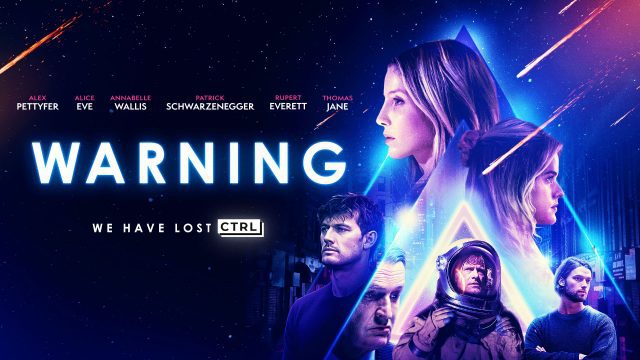 In the near future, a group of disparate individuals contemplates the meaning of life as deadly asteroids hurtle toward Earth.

The film works in a sort of condensed Black Mirror way, offering glimpses into a wide array of characters in a near future world. As unique as this way of storytelling is, it’s also becoming way too overdone. Intertwined stories used to be one-offs, with spectacular and woven events but these days it’s becoming more of a way to write short, interesting scenes and scenarios for unique characters, than typical film arcs where more depth and character investment takes place.

The first part of the film feels very disconnected as we flit from one tale to another, but the film still comes over as an interesting watch. Alice Eve gets a juicy story about an Alexa device which also doubles as God. It plays your music, but also tracks your sins. Alex Pettyfer and Annabelle Wallis get a brief, but highly interesting story surrounding wealth, privilege and immortality. Kylie Bunbury and Patrick Schwarzenegger get a weird love, break-up and tech arc. They are all very interesting, but all together just mini-snippets of something that Black Mirror would do better. The stories on show simply remind you of Black Mirror, then make you wish that their longer story format would deliver some of these tales in a more rounded, fuller and more socially horrific way.

There are other stories in play in the film too, all along the same lines and all fitting into this loosely connected world. Some are more engaging than others, but all are well done, with some potentially disturbing. There’s quite simply a really impressive cast for the entire film and frankly they all do a brilliant job. Other actors in the film include Thomas Jane, Rupert Everett, Garance Marillier, Toni Garrn, Benedict Samuel, Annabel Mullion, Tomasz Kot, Richard Pettyfer and Olga Boladz.

There are though two problems to the film which will ultimately be its undoing in terms of traction and review scores. Every review for the film will simply go on about Black Mirror (as I have sadly done) and in that way it will come across an unoriginal, and somewhat lesser than its inspiration. It is original, and even with the homage to the writing style and even delivery of Black Mirror, it’s still mildly thought provoking, terrifically well-acted and a reasonably well planned out film.

Secondly, as the film goes on, the initial copycat nature of its storytelling becomes a distant memory as you get glimmers of its interconnectivity whilst the strange and intriguing stories gets played out. That is, until the end which frankly does nothing to round out these tales, or connect them to the extent of the investment in them. There’s certainly a message in there about humans, technology and emotion, but it sadly gets misplaced and muddled. Towards its end, the film sort of pivots without really rounding off the tales. Then we get a strange, most unsatisfying ending to all the tales.

Directed by feature debutant Agata Alexander, from a screenplay she co-wrote with Jason Kaye and Rob Michaelson, there’s certainly nothing wrong with the film as a debut. The tones and tales all feel unique and there are many good shots that seasoned directors would be proud of. There’s a bit of action, a bit of narrative humour and all in all it’s an entertaining and enjoyable film. The effects are also pretty spectacular for a film with a such a low budget.

It’s an interesting, almost moreish film, yet only mildly thought provoking when it could have been thought engaging. Sci-fi fans and lovers of Black Mirror will enjoy it for the most part, but it could have been so much more. Like a dog that’s missing a few teeth, its bite could have sunk deeper and left more of a mark.

Signature Entertainment presents Warning on Digital Platforms in the UK from October 25th, 2021.