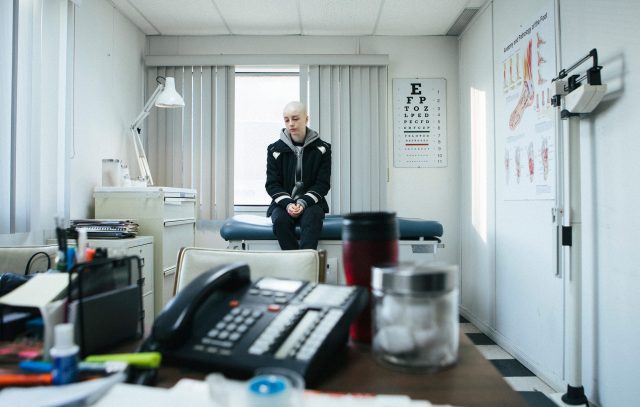 We’ve all probably told a little White Lie at one time or another. White lies are meant to be trivial, causing no harm to anyone, but this film takes a little white lie, a whopping great bit further.

The film centres around Katie Arneson, a university student who fakes a cancer diagnosis for notoriety and financial gain. As her lies begin to overlap and catch up with her, she struggles to maintain her web of deceit.

The film doesn’t hang around much in the way of introduction and back-story in the opening stages. We happily delve straight into Katie’s mendacious journey and join proceedings at a fairly advanced stage. The clear storytelling and direction allow for this to happen and we quickly get onboard, and up to speed, as to what the fib is going on. Writer/director duo Yonah Lewis and Calvin Thomas are clearly adept filmmakers, wonderfully creating and visualising this thought-provoking narrative.

The films content is actually a rich and thoughtful tapestry. It not only glances at the fragility of one’s own validation, but also takes a side glance at how most people are openly trusting and invested in other people’s online woes. Online donations are big business, with fundraisers set up and created without much need for evidence, relying on a system of trust and blind validation. It’s truly quite terrifying that the film itself is inspired by true stories of people committing these sorts of deceptions.

The lengths taken by Katie, seemingly for so little reward, are astounding and the snowballing of her deceit and the path of victims created, lied to and used is horrifying in its simplicity and emotion. Assuming her deceit is victimless, she goes full barrel along a path of untruths, telling more porkie pies to cover her tracks in an attempt to outrun her own reality. The online sympathy she gains is transferred into the real world and is used symbiotically to enhance her notoriety, while benefitting her own relationships and increasing her financial gain.

The central character in all this is played by Kacey Rohl. Kacey is an actress with an enviable C.V. in geek television, and boy, is she good in this. Not only is her visualisation of the character pitch-perfect but her subtle yet clear mental deterioration is well played out by an actress who has clearly invested in the narrative.

Sadly, its not all good. While I don’t mind a mystery or self-interpreted ending, one thing this film has is an annoying finale. By design, its left to the viewer to lip-read and imagine what may, or may not, happen next. Its abrupt end does nothing to enhance a well-played out film. With no on-screen resolution or comeuppance seen, it leaves a bitter aftertaste to what was a 96-minute-long delicacy.