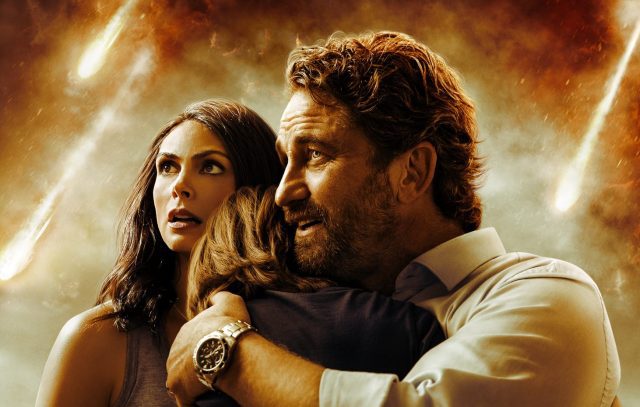 Greenland revolves around John Garrity, his estranged wife and their young son as they embark on a perilous journey to find sanctuary as a planet-killing comet hurtles toward Earth. Amid terrifying accounts of cities getting levelled, the Garrity’s experience the best and worst in humanity. As the countdown to the global apocalypse approaches zero, their incredible trek culminates in a desperate and last-minute flight to a possible safe haven.

Apart from expecting Gerard Butler to save the President by punching an asteroid in the face, not too much left me disappointed with Greenland. I was actually happily surprised to enjoy it so much. You get a lot of film with it too, with a runtime at just over 2 hours long. It’s a return of the big blockbuster run time and its actually all the better for it. Initially looking like a cheap and predictable Deep Impact and 2012 clone, the film inserts quite a few twists along the way as the family centred drama takes centre stage amid the backdrop of large scale global destruction.

The budget for the film, a reported $35 million, is extremely well spent. Its limited worldwide box office run reportedly brought in a healthy $47 million. That means that before its sale onto streaming services, now billed as an Amazon Original, the film has already turned a pretty profit. The budget constraints obviously mean that there’s a few times where the CGI fails quite badly, but most of the time its barely noticeable with all the tense drama and plethora of extras adding to the global catastrophe scale of the narrative.

Director Ric Roman Waugh has of course worked with Gerard Butler before, but Greenland is a different beast from Angel has Fallen. There’s plenty of action and emotion in the film and the scaling of the disaster is brilliant and delivering what they did for the budget is top-notch work. The films climax leaves a little bit to be desired but I found it thoroughly enjoyable up to that point.

Gerard Butler plays a far more unheroic and vulnerable character than we are used to seeing, not that it’s a bad thing every now and again (My wife quite fancies him, but apparently, he’s not so hot with the beard). Morena Baccarin grows into her character as she goes through the ups and downs of her arc, while their son, played by Roger Dale Floyd, also follows an upwards trajectory, settling nicely into his role as the film goes on. There’s also some able support from the likes of Scott Glenn, David Denman and Hope Davis thrown in to lighten the burden at key moments too.

I’ve seen a fair few negative comments about the film but epic scale disaster movies should not be enjoyed under a microscope. There are always bad decisions made in them and times when you question why they did things – but that’s half the fun of them! Yes, some are long-winded and frankly bad, but they should simply be enjoyed for their escapism, daft what ifs and their sheer entertainment value.

Greenland could easily have been extended into a four-part mini-series and I could quite happily see a streaming service spin-off following the same cataclysmic events from another family’s perspective.

In these horrid times, Greenland is simply a great escape for two hours from the real-life disasters going on in the world. It’s a proper big scale action film, and oh how I have missed them.

Greenland is out now on Prime Video in the UK.