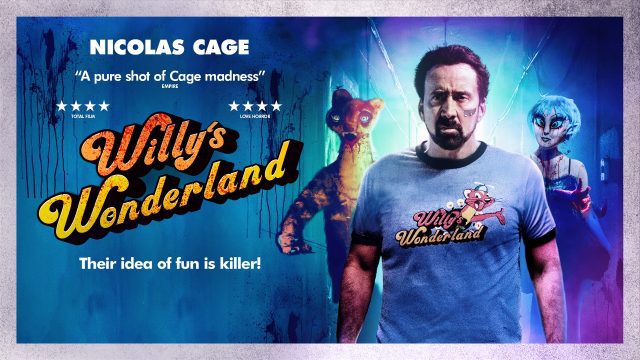 If you’re a fan of Nicolas Cage (and frankly who isn’t) then Willy’s Wonderland will be right up your film street. In fact, the film offers an all-new look at Cage because, out of his 103 past acting credits listed on IMDB, you will never have seen him talk so little, or clean so much.

Cage plays mysterious mute, The Janitor. After he is involved in a car incident, and with no cash to pay for repairs, he agrees to work off his car repair debt by spending one night working at Willy’s Wonderland. All he has to do is clean the place and tidy it up a little but he soon finds himself locked in an epic battle with possessed animatronic mascots that roam the halls. To survive, he must fight his way through each of them.

Cage’s range has always been finite but you have to give the guy massive credit as he keeps working, keeps trying and he does churn out the odd very entertaining film. Unlike others with his level of fame, he does try his hand at slightly odd projects and in Willy’s Wonderland he actually looks like he is having some serious fun, rather than just going through the motions which has plagued some of his more recent films. It really is an alpha Cage performance – one so ridiculously simple, yet thoroughly daft and enjoyable. The Janitor’s backstory is a mystery and this only goes to deepen the intrigue, allowing Cage the freedom the character needs.

Quite frankly, I never knew how fascinated, no engrossed, I would be to watch an incredibly intense and quiet Nicolas Cage cleaning, or how angry I could get watching his lacklustre and frankly pathetic mopping skills.

Emily Tosta plays Liv, the films main support, and she does a fine job of showing a bit of typical female horror film badassery. Her other co-stars do OK too, easily dishing out the lines and performing their dumb comedic horror fodder roles admirably. This film though is all about Mr. Cage.

The film’s directed by Kevin Lewis in, quite oddly, his first feature film for almost 15 years. G.O. Parsons breaks his screenplay duck too, in a film that seems to be a strange, yet successful coming together. Not only is the financing all over the place, as it is with most films these days, it just seems to be a creative hybrid, all neatly sewn together like a flesh shirt.

Now, Human versus. puppets, toys and animatronics is not a new thing. With inspirations taken from Five Nights at Freddy’s and things like The Hug, Willy’s has a real Chucky crossed with Sesame Street vibe which really keeps it fun and interesting, as well as ridiculously and curiously daft.

The film doesn’t try to be too creepy and suspenseful, going straight into somewhere between action, comedy and horror. Various cleaning objects are used, hammy, laughable violence is everywhere and the ridiculous costume character animatronics all just feel right in a film so very fascinating, comedic and thoroughly entertaining.

There are many times the film could have gone sideways, down a path of uninteresting repetition, but the creative decisions made throughout keep it at a good pace, with a consistent and justified feel to it. It certainly doesn’t overstay its welcome and leaves enough in the tank for a possible sequel or prequel.

I am so happy we are currently living in a limited budget film paradise, where low-budget films are getting some serious traction because the big studio features aren’t in town. It’s a great time to see fresh films, new ideas and new talent come into the film world and frankly, long may it continue.

I loved Willy’s Wonderland for its daftness, refreshing creativity and sheer entertainment value. Be on the lookout too for Willy’s Wonderland merchandise as I expect an almost cult like status for the film and a whole heap of t-shirts will get made and I for one will be buying one.

Signature Entertainment Presents Willy’s Wonderland in the UK, with its worldwide release on all digital platforms from 12th February, 2021.