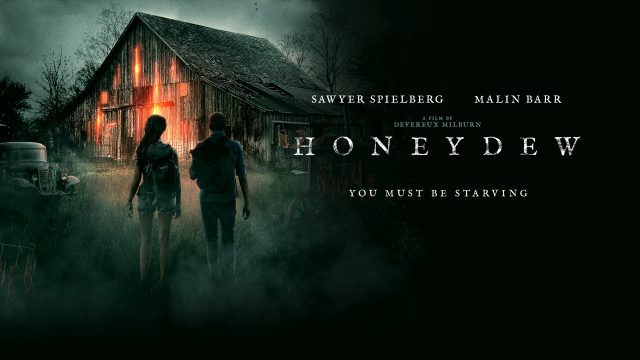 Honeydew follows Sam and Rylie. When their car encounters trouble on the road, they seek shelter on a local farm but soon find themselves at the mercy of an ageing farmer and her peculiar son. The kindness of strangers is always welcome, but that kindness quickly descends into hallucinogenic fuelled madness, as their host begins to show her true colours.

At times the film looks, and even feels, like it’s some sort of generic tick-box exercise in subtle film horror creepiness. You know, the sort that’s been played out to death in so many American and Australian outback horror films. This, thankfully, is a little more subtle, original and creative than those typical gore-fests. Here we have some thoroughly interesting characters which help to up the intrigue, and the slow build up teases and escalates to a somewhat disturbing finale.

The film marks the feature directorial debut of Devereux Milburn, and as debuts go, the film is certainly a memorable one. There’s clearly been some intelligent thought behind the narrative and its presentation to enable it to come across as unique, yet with a familiar and distinct vibe to it. The subtle parallels given from the television screen cartoons to the narrative are excellent, and go a long way furthering the tension and adding depth to the story. There’s some great editing on show here to, with comic book style split screen segments, to vary the flow. It sort of feels a bit out of place, and some won’t like it, but it kind of works, showing variety and a sense of duality and urgency.

Sawyer Spielberg, who annoyingly gets far more screen-time than his co-star, is pretty good in his first, proper feature debut. Sadly, his co-star Malin Barr gets a bit less screen time than she deserves, which is a real shame as she does a sterling job when called upon. The biggest praise though must be reserved for Barbara Kingsley, who plays the gloriously creepy old grandma figure. Some well-written, quick-witted dialogue and her menacing old-lady posturing, enables her to blossom, easily delving deep down into her characters creepy, twisted nature.

The initial narrative thread is slowly drawn out, quite deliberately I might add, to add tension and helps with the viewers investment in the characters. There’s an aura of sheer ghastly creepiness hanging around, and it slowly seeps through to the viewer, like the smell from a full bin. The whole films just weird enough to be interesting and unique, yet thoroughly entertaining. While it does start slowly, building tension as it goes, it provides you with an interesting journey towards to end. The slow, what’s-going-on build up brightens up in the toe-curling, creepy final half hour.

I will freely admit that I’m not the biggest watcher of horror films. It’s as rare as rocking horse poo that I will willingly sit down and choose to watch a horror, but you know what? I’m really pleased I did. I enjoyed it, and quite simply, that’s what films should be all about.

Signature Entertainment presents Honeydew on Digital Platforms in the UK from 29th March, 2021.