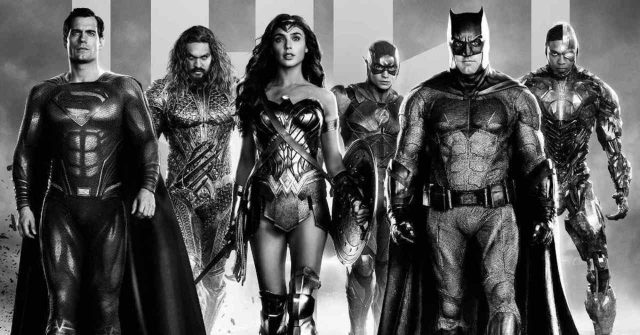 It’s difficult to review a film that should have come out four years ago. Four years seems a very long time ago. It’s a time before Infinity War and Endgame, and COVID 19 was but a twinkle in his dad’s eye. Justice League (2017) should have been the crown jewel, the big oomph in the DC/WB film machine. Instead, it ended the joined-up DC brand of superheroes, and made everything loose and solo again. Not that creative freedom has been a bad thing for DC Films since, WW84 aside. It’s should have spawned two DC motion pictures a year, crossovers and a sequel. It was meant to crush the Marvel bandwagon and, well, it didn’t.

The Snyder Cut though, is simply a win-win for everyone. It’s equally great for the fans, and for HBO Max. The extra $70 million production costs for an original film is the going rate for streaming service features, and this is, without question, the most talked about streaming service blockbuster of all time.

Now, my views on superhero films are that they firstly have to be entertaining, and secondly thoroughly re-watchable. This is why some of the Marvel ones may do big numbers at the box office, but their copy and paste, bad-guy-is-equal-to-the-good-guy formula is fairly uninteresting on a re-watch. I’m actually one of ‘those’ who think that Batman v Superman: Dawn of Justice is a really good film, and I re-watch it often.

Straight from the start of the Snyder Cut we begin to see the differences between it, and the 2017 theatrical version. Rushed over scenes to meet the two-hour Whedon cut time limit actually get fully fleshed out. This certainly helps to build and develop the characters, with The Flash getting a good start ahead of his upcoming solo film, and Aquaman’s arc getting nicely rounded to fit the timeline of his first solo film. Affleck’s Batman also doesn’t look so much of sweaty mess all the time in the Snyder Cut, while Diana looks far more like the heroic Amazonian Princess that we left in Wonder Woman. Without doubt, Cyborg gets the most polished and central narrative, which is why I assume Ray Fisher is so annoyed by Whedon, his treatment and his theatrical cut of the film.

Many said that Fisher and Miller were bad actors, too weak to play superheroes who were destined for their own solo features. Like a lot things about The Snyder Cut, it’s a big, bold, fuck you to all the haters, doubters and Ne’er-do-well’s as they, in particular, shine now that they have better dialogue, fully fleshed out arcs and superior CGI. There’s plenty of scene overlap between the two-cuts, but even with these the Snyder Cut versions of them seem to have been presented much better.

The overall stakes are also far greater too. The villain, Steppenwolf, looks far superior, and is certainly far more menacing now that he’s been fully fleshed out. There’s just a grander scale, more motivation and greater interest in this versions big-bads. The film ticks along, sometimes with a tock, until it reaches the last 70 minutes or so where it really gets going, intertwining all those threads and delivering a finale that’s full of sheer comic book entertainment.

It’s not all thoroughly positive though. Sadly, some of the ill-fitting comedy is still in there, so Whedon can’t be to blame entirely for the flat humour of Josstice league. Although it’s a wonderful, hell-for-leather spectacle, it’s most unquestionably an overly egged pudding. Between hours two and three there could have been a little bit of trimming. I too often went down Josstice Memory Lane as scenes were identical, and after seeing them before, I got a tad bit, well, bored. It’s simply too bloaty, a bit too gassy and needed a Rennie or two to be more comfortable. There’s still occasional bits of CGI fail too, such as the Lex bit straight at the start, which frankly looked terrible. It’s certainly no worse than any other heavy CGI film, but one of my favourite comic book characters of all-time has a cameo, and that wasn’t up to much in the effects stakes either. I also have no idea what the point, or worthiness, of the new Joker footage is either.

Obviously, there was meant to be more films after this version, which is why Superman fans may feel a tad short-changed at Cavill’s limited screen time. His Superman journey is probably sadly over and he deserved, in hindsight, a bit more on his way out of the door.

It’s sad to see such world building go to waste, even if you don’t like where its dark direction was going. DC Films are the world leader in comic-book animation and I would absolutely love the films sequels, which are all storyboarded and ready to go, to land in animated form so that we get to see the full arc of the Knightmare Snyderverse.

Although this isn’t the mystical Snyder Unicorn that social media would have you believe, it’s certainly justification for letting directors see out their vision. It’s more than a worthy trilogy film, and a vast improvement on the 2017 version. The vast majority of the 2017 versions giant flaws are corrected, albeit by creating a few new ones to go in their place.

Entertaining and re-watchable, and that’s all that counts.

Zack Snyder’s Justice League is out now in the UK on Sky Cinema/Now TV, as well as on HBO Max in the states.