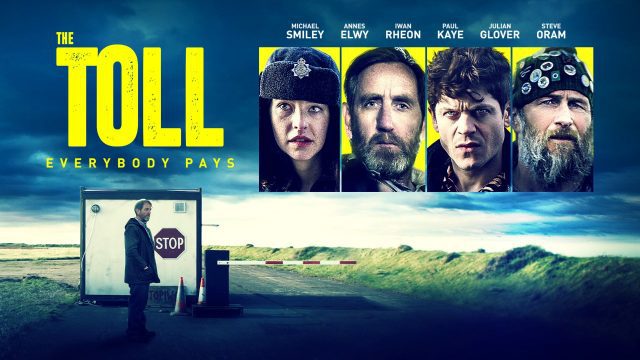 On the Pembrokeshire border, a man working solo shifts in the quietest toll booth in Wales, hides from a criminal past where nobody would ever look. As his past actions catch up with him and his peace is shattered, he enlists the help of local ne’er-do-wells and oddballs (including a female Elvis impersonator, rampaging triplets and disgruntled sheep farmers) when village police officer Catrin becomes increasingly suspicious.

The films Welsh director Ryan Andrew Hooper delivers a Fargoesque narrative with some great looking cinematography of picturesque Wales which clearly shows off his love for the genre – as well as the local area. For those who have lived in a small British village, as I have, some of the films humour will really hit home. The film gives a good slice of the typical bunch of oddballs in a British village, with some clever hit-and-miss observations and comedy causing as much derision as laughter.

The films overall story is a little oddly presented. It’s chopped up timeline presentation tries to be a little bit too clever for its own good. Whilst not confusing in any way, its timing and end result just seems a little off. The same could be said for its character development too. There’s just too much unjustifiable oddness thrown in to a film with such a short runtime. The investment in such an array of over-the-top and odd-ball characters just doesn’t feel warranted. We simply don’t spend enough time on their journeys to make any of them stand out, or for that matter, too likeable.

Smiley in the lead as the village level crime-lord hiding from his past in isolated Western Wales really works and he continues his busy and productive year following on from performances in Censor and Gunpowder Milkshake. The dry and monotonal performances of Smiley are usually so captivating and he again delivers a typically terrific performance. Opposite him stars Annes Elwy who plays the local village copper. She has to deal with all the strange goings on, the village oddballs and her own grief as she too puts in an impressive acting performance.

Game of Thrones’ Paul Kaye and Iwan Rheon both offer some able support, but their mildly off-beat and generically over-the-top performances do lack a bit of consistency and overall focus. Added to that, Gary Beadle’s character shows up and offers some serious chemistry with Smiley, only for that to be sadly cut short.

The Toll passes by without ever obtaining any memorable highs apart from a few witty lines and semi-forgettable characters. It never delves too deep into being a gangster film, nor too off the track to be a comedy. It sits in some sort of British film purgatory, not really knowing – despite some solid acting and good filmmaking -what exactly it wants to be. It’s a love letter to Wales and an appreciation of a certain genre, but its just not enough.

As a 78-minute film, it’s just a bit short of some Welsh meat on its bones. It’s certainly a sly and witty British film, but just a tad more thrills, comedy, intrigue, action or backstory would have fleshed things out a bit more giving a much more rounded and worthwhile film.

It’s a good, quirky piece but one that is sadly all too forgettable.